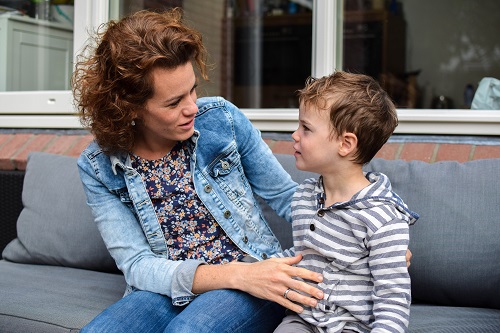 My name is Jolien van der Geugten and I live in the Netherlands. My son is 5 years old and has X-linked ichthyosis.

When my son was only nine days old he got strange spots in his face. They looked like wet yellow crusts. I called the midwife because my husband and I didn't trust it. They told us that it’s baby acne. The next morning it was worse. A lot more strange scabs around his eyes, his nose and on his forehead. I called the midwife again, and she came to see my son. She advised us to go to the doctor's office. The general practitioner sent us directly to the emergency room.

At the emergency room, the pediatrician thought it was serious: an infection in his face. The dermatologist rushed to the hospital. They thought of impetigo. My son was admitted and got an infusion of antibiotics. My son could barely open his eyes because of all the scabs and skin.

I was shocked, sad and angry. Why was I reassured that it was baby acne? How did he get the infection? Could we have prevented it?

After a few days we got answers. The dermatologist thought he had X-linked ichthyosis. The fact that he has ichthyosis explained the dry, flaky skin he had just after birth, but was not recognized by anyone as ichthyosis. With ichthyosis, bacteria can more easily cause a serious infection. The advice was to apply fatty ointment at least twice a day.

And that is what we did. Applied it twice a day. But he got itching, a lot of itching and red scratched open skin. He cried at night and was inconsolable. I got in touch with the patient association in The Netherlands. Through the association I got to Prof. Dr. Pasmans in the Erasmus Medical Center in the Netherlands. She found out that my son also had eczema. With several ointments we got the eczema under control, and his skin became more stable.

Several times I have felt guilty. Have I had been shipped off with baby acne? Did I give my son the best care? What if I had lubricated him with ointment every day immediately after birth? As a parent, I wanted the best for my child. But with rare skin conditions like ichthyosis, you don't always know what's best. I got a lot of strength from FIRST’s Facebook groups, the Dutch patient association and FIRST. The recognition and advice I received were amazing.

My son is now 5 years old. He entered primary school and I realized there is no book to explain about his condition to his new friends. That's why I wrote an adventurous children's book about a boy with ichthyosis for children from about 3 to 6 years old. In May 2021 the book will be published in the Netherlands. There are plans to release the book in English as well at the end of 2021.