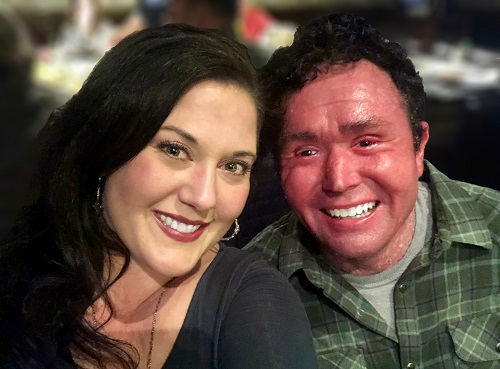 He is my serendipity…I wasn’t looking for him, and I surely wasn’t expecting him. My heart however, had been quietly and purposefully growing a place for him. I got lost in him…a kind of lost that is exactly like being found.

In 2012, I was managing a commercial office building in a suburb of Jackson, Mississippi.  One of the tenants in my building was a guy around my age who managed an automotive finance company with his father.  I had been told that Cory had been burned in an accident of some kind, yet didn’t know details.  We met, and I shook his very textured hand, noticing his thick black hair, and extremely red skin.

Cory was effervescent, outgoing, and extremely talkative (I would later discover this was the salesman in him). Our first meeting, he was wearing flared jeans, a western-style shirt, cowboy boots, and a wide brown leather cuff on his wrist. The fella’ had flair for sure! We shared a brief, yet enjoyable conversation; his laugh was endearing - kind of a giggle/snort that made me smile.

We crossed paths every few weeks, and he would bring his monthly rent payment to the management office.  We would casually chat about music, weekend plans and such.

Married going on thirteen years, my daughter Noelle had just turned six.  As a bachelor, Cory’s stories of weekend partying with friends were far more festive than mine.

In 2015, I stumbled upon a parenting article written by blogger Courtney Westlake (www.courtneywestlake.com).  While reading through her posts, I saw a photo of her daughter Brenna.  An adorable little girl with wisps of blonde hair, and extremely red skin.  I had become familiar with skin that was red and flaky.  I recognized the shine on her cheeks, and the unique curve of her little fingers…she was the same kind of different as Cory!  That was the day I learned about ichthyosis, and the day my heart began preparing for a future still totally unknown to me.

I would eventually come to know Cory has ichthyosis en confetti.

For the next several hours, I read every single post on Courtney’s blog.  I jumped on Amazon and pre-ordered her book, A Different Beautiful. I began researching ichthyosis in great detail; medical data, daily regimens, social dynamics, etc.  Unexplainably, I desired to know more.  My heart already knew what I could not yet understand.

In January 2016, Noelle’s father wanted a divorce, and I found myself single for the first time since I was 17 years old.

The divorce was finalized in June, and at the urging of my girlfriends, I joined an online dating site.  On July 3rd, my very first post-divorce date stood me up.  Yeah…no fun.  With a bottle of wine and my cats, I sat back and spent the evening on Facebook.  I commented on a silly post Cory made about “eating beer” at a bar, and he private messaged me.  After telling him of my date being a no-show, he declared the guy an “idiot who doesn’t know what he’s missing”.  He then asked me if I would go to dinner with him, and I accepted.  After wrapping up his evening of “beer eating”, we talked on the phone effortlessly for the next eight hours.

We very quickly fell head-over-heels for each other, and were both scared by our intense connection.  Cory was always a part of a great social circle of close friends, yet was insecure about how his skin would be accepted in a physical relationship.

Remember all the ichthyosis research and serendipitous heart stuff?  It all made sense now…being so endeared by his laugh, happening upon Courtney Westlake’s stories about Brenna (my pre-ordered copy of A Different Beautiful arrived on August 4th 2016; exactly one month since our first “all night phone date”), and a lifetime of what then seemed to be insignificant moments.  It is almost as if we can look back and see a dedicated timeline that began decades prior steering us together.

Even as I type this, I am smiling…the texture of his skin beyond sensual…the contrasting crimson and white spots on his body breathtaking…Cory was uniquely created for me, and by some miracle we found each other.

Early on, he would sheepishly apologize for “all the flakes”, and was always brushing loose skin 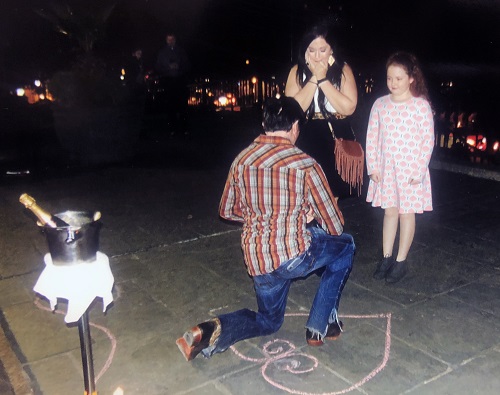 from chairs, the bed, dining room chairs, etc.  Noelle lovingly coined the phrase “Cory confetti”, and it is as much a part of our home as air.  When he’s working out of town, I sleep on his side of the bed as the “confetti” is comforting; it has become as familiar as his scent.

On February 2, 2017 overlooking the Riverwalk in New Orleans, he got down on one knee, slid a breathtaking vintage diamond ring on my finger, and asked me if he could love me forever.  He then presented Noelle with a ring of her own, asking if he “can be your forever Cory”.  The joy of that moment cannot be described with words.

At 2:00 on a Wednesday afternoon, Cory, Noelle and I became a modern-day family. Wearing a dress from my closet, we picked up two small bouquets at the grocery store, and sent texts the day before to our families telling them what time to be at the church. Noelle was integral in our ceremony, as she is in our life. Cory and I exchanged vows, and also made vows as parents to my daughter; gently and patiently their bond has become so precious.

I can’t believe the first anniversary of our forevering is next month! Our time together is going by so quickly, and life has never been sweeter. 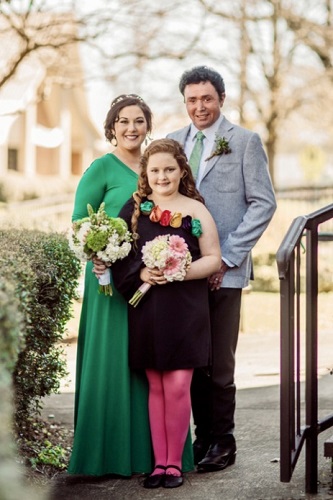 Cory and I were created for each other, I am certain of this.  He is my dearest friend, and we are hopelessly (often “grossly” our friends say), and unapologetically crazy about each other.

Ichthyosis is part of who Cory is, and is a part of our story.  Having a visible difference has contributed to his gentle and kind spirit, empathetic tenderness, Rockstar charisma, quirky (and often delightfully off-color) sense of humor…he is quite the catch, and still I am awed that he chose me.  I love him fiercely, tenderly, and my breath catches when he walks in the room.

Our lives before each other could not have been more different.  The love of our little family is pure magic and surrounds us like confetti.

“And though they are different in station and form, their lives are just perfect, though far from the norm.  So if you’re wishing for true love, what’s important it seems…is to accept all the differences… and to share the same dreams.” One Enchanted Evening