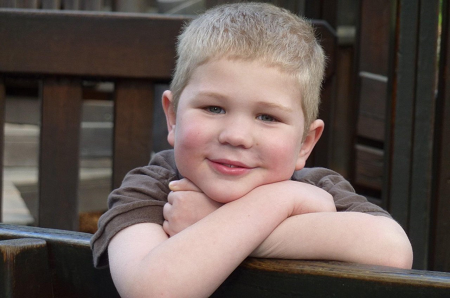 My son was placed with us for adoption as a newborn in an open adoption. We did not make it the day of his birth, but spent day two in the hospital with him and his birth parents building the start of a wonderful relationship! Nothing was noted at birth to be wrong, but looking back there were possible signs. He was very red when he was born. They took him for extra tests because of how red he was. When we took him to our hotel room that 2nd night and gave him his first washcloth bath we noticed his skin was rubbing off on the towel. Being first time parents though, we thought it was normal. At 2 months old, he was diagnosed with eczema all over his belly. We dealt with constant dry skin and tried to keep him covered in baby lotion. At age 4 he was referred to a pediatric dermatologist for his dry skin. They told us he was missing a lipids layer in his skin and just keep putting lotion on it. We used sugar scrubs and lotions several times a week trying to keep the scales down and combed his hair/scalp after every bath to reduce the scales on his head.

Finally, as it got worse and worse over the years I started doing my own research. Looking through Google images of scaly skin I came across ichthyosis. When he was 13, I took him to our local general practitioner and said I think he has ichthyosis. She had to get out her dermatology book and start researching. She came back and checked a few areas to look at his skin and said she agreed with me.

After that confirmation I found FIRST. I contacted the Yale program for testing of type but since it sounded like ichthyosis vulgaris, they did not want to test. I had a feeling it was actually X-linked based on what I had read on the FIRST website. I got a referral to another dermatologist. He was number 15 at this point. The dermatologist office kept trying to refuse him to see the doctor and just wanted him to see the nurse practitioner. I fought and fought with them that this was not just eczema and finally they agreed to make an appointment with the doctor. The day of the appointment, the doctor came in saying so you think he has X-Linked Iihthyosis? He had him lay back and as soon as he looked at him, he got excited! He ran out and grabbed a camera and began taking lots of pictures of my son’s skin. He then turned to Google for more information. He had learned about ichthyosis, but had never seen it! He wrote us a referral letter to try and get testing done.

While going through my emails one day not long after, there was an email from FIRST about a trial for people with X-linked ichthyosis. We applied and were accepted into the trial. The first step was to complete a cheek swab genetic test to determine the type and sure enough he came back with the deletion for X-linked ichthyosis. We were unable to complete the trial as my son’s skin was not severe enough at the time. It was so nice to finally have confirmation of what was going on with his skin! He was 15 1/2 at the time of final diagnosis.

I wish we would have known sooner as we would have done things differently in some ways. Learning about it later made it harder to set a routine with him. He is now 18 and off to college. He has to be responsible for his condition on his own. Hopefully we have given him enough tools over the years to cope with it.