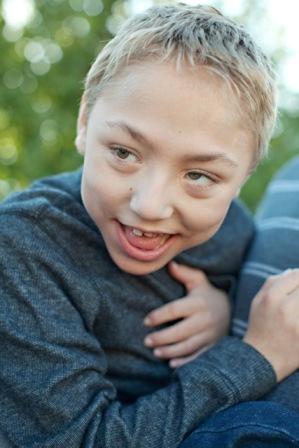 During my pregnancy with Mason I was very sick and being monitored very carefully. I didn't have any amniotic fluid and was hospitalized for 5 weeks prior to his 3 ½ month premature emergency C-Section delivery. When they delivered Mason and rushed him to the NICU team that was standing by, all we could hear were mumblings of 'what's wrong with him?' and 'why does he look burned?' We couldn't see him for almost 12 hours after delivery.

He was quickly taken and put on a ventilator. Every neonatologist and specialist available was brought in to consult on Mason’s case. He was just 12 inches long and weighed just over a pound when he was born. The doctors determined that he had a collodion membrane and would likely have some form of ichthyosis. We had a lot more serious issues to consider in addition to his skin. The first 3 months of Mason’s life were spent praying day-to-day that he would survive the next 24 hours. We lived our lives praying and hoping for him to be alive the next time we would visit. There were many nights his doctors would spend their entire night at his bedside. Watching a fragile premature baby with the collodion membrane peeling off, in addition to the amount of infections he was left open to, was very traumatic to witness for his family, his doctors, and his nurses.

We were blessed to have him survive his 4 NICU months and were sent home with an extensive regimen to follow for his care. He spent his first 2 years of life more in a hospital than out of one.

In addition to ichthyosis, our sweet 8 year old angel has been diagnosed with severe global brain damage, severe quadriplegia cerebral palsy, is legally deaf and blind, is tube fed, wheelchair bound, and has the mental function of a 6-9 month old. He also has a seizure disorder, heart conditions, lung conditions, and constantly has some form of infection.

Mason also has the sweetest smile and disposition of any child I know. He is hands down the most popular kid in his school. He loves playing with his toys and slamming doors. He loves to be held and wrestled. He loves to play in his bath every day for over an hour. He is the happy place for most of the people who work closely with him. He laughs when kids say mean things to him, (thankfully he doesn't actually understand them, but he finds the tone hilarious!). He makes everyone he meets feel like they are special to him.

We are constantly explaining Mason's conditions to people we meet and the comment we usually receive is how happy he seems to be. We are lucky to have such an inspirational child who is 'introducing' us and our family to the most amazing people we wouldn't meet otherwise. He touches the lives of everyone who spends any time with him. After such a traumatic beginning with so many unknowns to tackle and acclimate to, we feel so blessed to have Mason as our son. His skin condition sets him apart for his many specialists and makes him memorable. Who would have ever thought that it would be a blessing!