Such a Happy Kid! 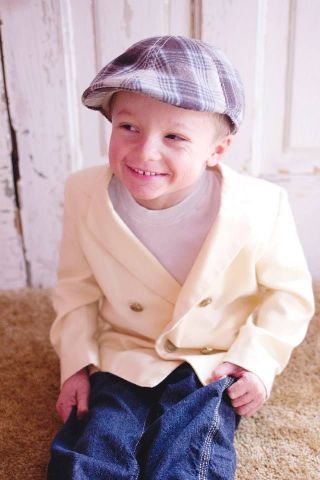 The day Kenny was born was so surreal.  He was two weeks early and my first, so I had no idea what to expect.  I was told babies can look strange when they are first born, from color variations to misshapen heads.  So when I first saw Kenny, I just thought “Wow, he is really tan!”

The geneticist came in that very same day a few hours after his birth.  She informed us that he had ichthyosis and proceeded to horrify us with everything that could potentially be wrong with him, including life expectancy.  Another doctor came in and said to put Aquaphor on him a couple of times a day and drops in his eyes.  They kept him in the ICU, but only for jaundice and he received no extra treatment.

Four weeks after we brought him home he began to shed the collodion membrane…which was truly terrifying.  Fortunately my pediatrician was wise enough to get me in contact with the most amazing pediatric dermatologist at Riley’s Children’s Hospital.  She guided us through some pretty rough days and proactively searched for products for us to try that would best help Kenny.

Till this day, Kenny is known for his smile!

Those who meet him fall in love with him instantly.  He is such a happy kid!  He loves sports, loves to wrestle with his Daddy, play with his sister and brother, and love on his mom!  Like any normal 5-year-old boy he does not love to take baths, but we make it fun and he actually enjoys trying to get more “itchies” off than mom (any type of competition works for a boy!).  He knows he is super special because God made him with extra special super skin—he lights up every time I tell him!  I just recently learned, and he was extremely hesitant to tell me, that some kids at the park kept asking him why he was so dirty.  I asked him what he said, and with his cute grin he puts his hands up, shrugs his shoulders, and says, “I just have dry skin.”

His sweet spirit and sincere kindness is humbling and inspiring to me.