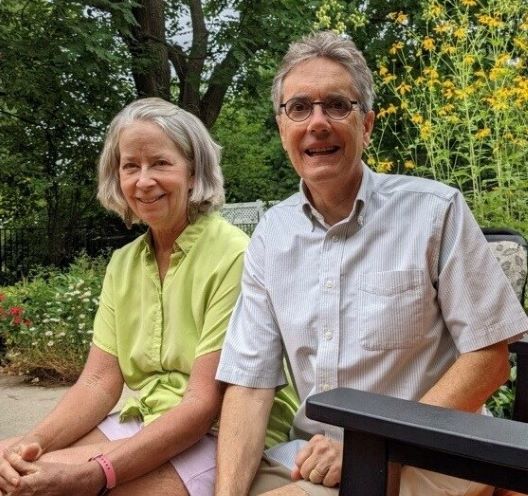 Terry and Robert Melton have created The Weary Fund through a generous contribution in honor of Terry’s parents, Dr. Peyton and Janet Weary, and their strong commitment to FIRST.  Both Wearys  served on the Board of Directors of FIRST, as did Terry.  The Weary family contributions were underscored at a 2007 Testimonial Dinner, which by itself raised more than $30,000 for FIRST.

Dr. Leonard Milstone, emeritus member of the Board of Directors, remembers the Wearys fondly. “Peyton and Janet were revered by everyone I knew.  Although I did not know them well and although he wasn’t a native Virginian, Peyton was my idea of the epitome of the best of Virginia culture: a distinguished-looking gentleman, an accomplished academician, a caring physician and a sophisticated politician.  Janet was kind, supportive and generous – especially to young dermatologists and to FIRST.”

The Weary's concern for the environment was passed down to their children including Terry.  In his retirement, Dr. Weary spent much of his free time helping to educate the public about the impact of the environment on health.  Today, our warming climate is directly impacting the health of FIRST members.

Terry, an affected adult with epidermolytic ichthyosis, has been a FIRST member for many years.  She recalls difficult experiences of overheating and being unable to cool down.  She remembers her father carrying a window air conditioner up several flights of stairs into her college dorm on many occasions in North Carolina.

After college, Terry became a physician’s assistant and earned her PhD in genetics, working in forensics.  Now retired, she enjoys volunteering for local organizations.

Dr. Weary held numerous posts with the American Academy of Dermatology and other professional organizations.  In 1978 until 1979, he served as a member of and Food and Drug Administration Interagency Task Force and was instrumental in the creation of The Orphan Drug Legislation of 1983.  This legislation is responsible for many of the treatments now in use for rare diseases including dermatologic conditions.

Mary Williams, emeritus member of the FIRST Board of Directors says the gift is a wonderful way to honor Terry’s parents.  “From my early days as a trainee in dermatology, I knew of Dr. Weary as one of the giants of the specialty.  I'm not referring to his size - Dr. Weary was indeed a tall man and a distinguished figure - but for his large role in shepherding dermatology, as the entire medical profession adapted to changes in health care delivery with the introduction of "managed care". He did so as a scholar: by examining the quality of dermatologic care by both generalists and specialists; and by measuring the need for expert skin care and the capacity of the dermatologic profession to train appropriate numbers of practitioners. He then put all of this information to work for dermatology through his many years of service to the American Academy of Dermatology and other professional organizations.  He led by example, using his well-developed base of knowledge and his integrity, his personal commitment to providing all patients with skin disorders the best quality of care.  One of his still ongoing achievements was the establishment of free clinics, staffed by dermatologists, to screen the public for skin cancers.  These clinics continue to be held annually in many cities across the US. This gift of air conditioners for FIRST members in need is entirely in line with his commitment to dermatology patients' well-being and represents the perfect way to honor his and his wife Janet's service to FIRST.”

Thanks to Terry, the generous and kind nature of her parents will live on in their names through this fund which will directly and positively impact so many affected individuals and families as they negotiate the intersection of environmental change and their skin conditions.

Information on applying for awards from this fund will be available in the coming months.