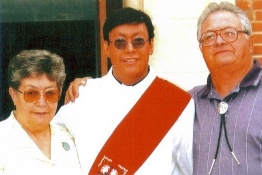 He Became Everything He Wanted To Be
by Lucille L.

It was June 2, 1964. I was in labor, anticipating the birth of our 4th child. The time came and our child was born. I was half awake, semi-aware, but sensed that something was not right. I didn't hear the baby cry. I sensed a quietness, some whispers by the doctor and nurses as they moved around. Someone carried the baby out of the room and he wasn't shown to me. Some minutes later, I don't know how long, the doctor was leaning over me, talking to me. He said, "it's a boy, but he has some problems. Do you want us to call a Priest, so he can be baptized?" I answered "yes." I was asked if we had a name. We didn't, but I quickly responded "John Paul." I don't know why that name popped right out of me. I wanted to see him, but was told he might live at most a couple of days and it would be better if I didn't. A dermatologist was called. He did a biopsy and the diagnosis was lamellar ichthyosis. We were told it was rare, was caused by a recessive gene and there was no cure. We found out later that most doctors had never seen it and some had never heard of it.

Two days went by and I was told I could go home the next day. I insisted I wouldn't go home until I saw him. The doctor walked out of the room. The next morning he came back and said he had decided my husband and I would be allowed to see our baby. We did. His body was covered with this thick, plastic-like covering. His eyelids were stretched outward and prevented his eyes from closing completely. (He later had surgery on his upper eyelids, but it didn't help much.) It broke our hearts to see him that way. We came home and left him, but we would go see him once a week. He lived one day at a time. I did a lot of crying and praying. I gave God two choices: "Heal him or take him." Loving him was not a problem, but I worried of what he might have to endure in this world. Eight weeks went by and we were finally told we could bring him home. We were instructed to isolate him from any germs that might be around. We already had three children and our house was very small; we didn't have any room. We were instructed the next best thing was to make drapes that would go around his crib. I started sewing the drapes and about halfway through I put them down and I told my husband, "I'm not going to hide him in that corner. If God wants to take him, we can't hide him and if He wants to save him, we can't hide him either. He will have to live in this world and the sooner we get used to it, the better." A few days later, we brought him home. We were very careful not to unnecessarily expose him to colds, etc. His siblings immediately loved him and knew we all had to be very careful. I got used to giving him his bath and applying the cream that had been prescribed.

At about six months old, we started taking him to church and other places. Yes, there were looks and questions, "Did your baby get burned?, etc." I knew their curiosity was normal and they meant no harm. I answered with patience, the best way I could. We decided we would face the world with him. A year and half later, we all welcomed his little brother into our family. They became the best of buddies and had many good times together.

The time came when he would go to Head Start. I held my breath and took him the first day. This wonderful teacher met us at the door. I explained what I could about ichthyosis & not contagious, etc. She put her arm around his shoulders and introduced him to the little ones there. They soon accepted that he was one of them. He made friends and loved being there.

Then came the first day of six years at parish school. I felt more confident since the Sister and many of the children had already seen him at church. He did encounter some problems, when a couple of children didn't want to sit by him or share a book. He went on to junior high, then high school, and each time I held my breath. In high school there was this boy who would wait for him at the door and try to trip him. Every time he had problems of that sort, we affirmed him with our love and told him not to worry, that these children just didn't know any better. I imagine he has had many difficult moments in his life that we didn't know about. We told him that he was to work hard and be respectful and obedient. We didn't "spoil" him. One teacher told me "He does much better than some who have everything going for them." He was an Honor Student through high school and had many true friends. He is outgoing and has grown up to be a compassionate and generous young man with a great sense of humor on top of it. His skin problems are still a daily struggle. His plans for the future according to his high school autobiography were to become a musician, an engineer or a priest. He actually became all three.

He earned an electrical engineering degree and went on to a high paying job in the aerospace industry. He dated a fine young lady and marriage was in the picture. One day he called us and said "I'm entering the seminary, I just have to go find out. If I don't, I will always wonder." The desire to become a priest had never really left him, even though had had tried to push it away. The young lady was very understanding, as he had mentioned this possibility to her before. After one year in seminary, he told us he would go back. He said to us "Without any pressure from anyone, now I know that is where I belong. I've never had such peace and joy in my heart as I do now." After five years he was ordained a Roman Catholic Priest. He is also a very good musician and music is part of his ministry. He is very happy serving the people of God. Some people have told us, "You have a wonderful son and we love him." We acknowledge that God is the giver of all gifts and we are very grateful.