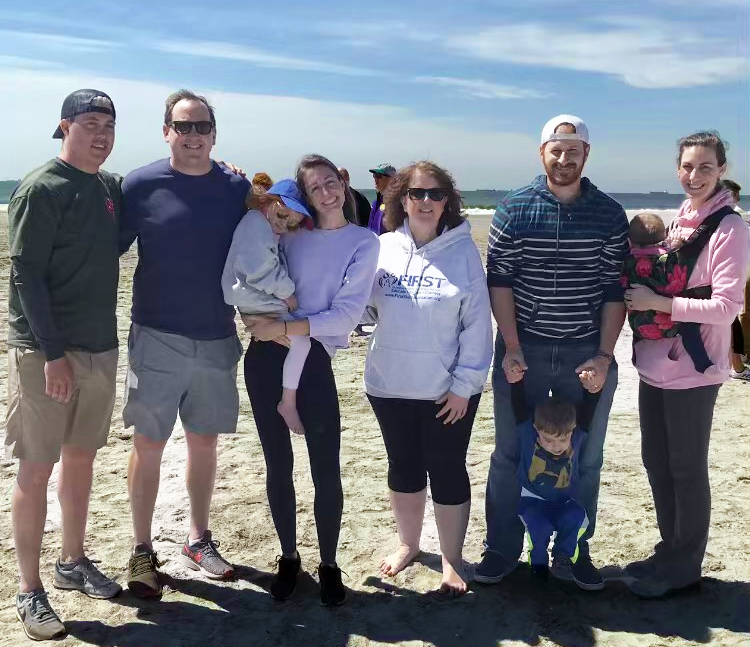 Ace in the Hole Foundation’s 10th Annual Beach Run & Walk took place at Lido West Beach on Long Island’s South Shore on May 11, 2019.  May 11 is a significant date. May 11 is the same day 1st Lt Michael LiCalzi died in Iraq while serving in the United States Marine Corps 2nd Tanks Battalion. Mike died along with 3 platoon mates in 2006.  Ace in the Hole Foundation was founded in 2008 to honor Mike’s life and sacrifice. Since inception, Ace in the Hole has raised and donated over $700,000 to those in need.  A particular focus has been on Marines and their families as well as underserved populations including those afflicted with rare/orphan diseases.

From the earliest days of his childhood, Mike knew that he wanted to be a Marine.  Following an arduous admissions process he was appointed to the United States Naval Academy and graduated with a Bachelor of Science degree in Economics in May 2004.  At the Academy he was a model student, courageous boxer and active leader of the 30th Company where he developed strong and lasting friendships.

Mike was commissioned as a 2nd Lt. in the USMC at graduation.  He completed The Basic School at Quantico, Virginia, before graduating as Class Honorman at the Armor Officer Basic Course at Fort Knox, Kentucky in July 2005. He took command of 1st Platoon, A Company after joining 2nd Tank Battalion. He led his Marines through several company and battalion level exercises to prepare them for their deployment with RCT-5 in support of Operation Iraqi Freedom. While deployed to Iraq, he led his Marines on numerous independent operations.  Among his awards for service are the Iraq Campaign Medal, the National Defense Service Medal, and Global War on Terrorism Medal.

Mike was an honest, ethical, modest, diligent and hardworking student and Marine.  He was exceptionally loyal and fiercely dedicated to his family, friends and the Corps.  Above all, he was an honorable man.

Ace in the Hole is run by Mike’s twin brother, Greg LiCalzi Jr, along with his father Greg. The Foundation strives to keep Mike’s memory alive by helping those who Mike would have helped. Much of our funding goes to support Mike’s fellow Marines from 2nd Tanks in North Carolina. The other segment of funds goes to help organizations that Mike supported while alive. One of those organizations is FIRST.

Although twins, Greg and Mike had one significant difference at birth. Greg was born with a rare skin condition. Not knowing what it was, Greg’s parents went to specialty doctors in the New York area and found that he had ARCI-lamellar ichthyosis.  While Greg has a milder case, it has affected his entire life both emotionally and physically. Now 37, Greg is comfortable in his own skin and leads a fulfilling life with a wife and two young daughters (both ichthyosis free). Before Ace in the Hole, Greg was alone in the world of ichthyosis. He didn’t see a dermatologist and was content using Dermal Therapy and going on with this life.

Because of Mike and Ace in the Hole, Greg started communication with FIRST on a giving level. From there, he was told by former ED Jean Pickford to go up to Yale and get checked out. Meeting with Dr. Milstone and Dr. Choate was life changing. Understanding his skin condition better, he decided to work more with FIRST and joined the Board of Directors for a short time. FIRST has been a beneficiary for the last 7 beach runs with Ace in the Hole donating over $85,000. Ace in the Hole has also helped those afflicted with Huntington’s Disease, Williams Syndrome, and Cerebral Palsy.

This year’s event brought the best weather in ten years. A beautiful sunny day led to over 450 people to come to the beach and run in honor of Mike. The event raised over $75,000. Four families afflicted with ichthyosis were on hand to take part. Outside of a FIRST event, it is probably the most FIRST families at an event that Greg has ever attended.

Please visit our website at www.aceintheholefoundation.org to get more information on Ace in the Hole Foundation.

Ace in the Hole Foundation (501(c)3 charitable status / Tax ID 32-0242966) was founded to properly remember and honor the sacrifice of 1st LT Michael LiCalzi USMC.  1st LT LiCalzi lost his life while serving our country during Operation Iraqi Freedom in May 2006.  The Foundation provides financial aid, material assistance and succor to charitable organizations and causes.
Share This Page: