What is Pachyonychia Congenita (PC)?

PC follows an autosomal dominant pattern. Autosomal means the genetic defect is carried on one of the 22 human chromosomes that do not determine sex. Dominant means the gene with the mutation dominates over the normal gene.  A person with one dominant gene for PC and one gene for normal skin will have PC. Nearly one-half of those with genetically confirmed PC are spontaneous cases, meaning that the disorder is spontaneous and not inherited.

Keratins are proteins that are important to the normal function of hair, nails and skin. Not every affected individual exhibits every clinical feature. Each person with PC may display a unique set of signs and symptoms, even within families.

What are the Signs & Symptoms?

Based on the data of over 900 genetically confirmed PC patients, the main clinical features associated with pachyonychia congenita include:

Because of the many similar disorders, often the only way to ensure a patient has PC is for that patient to receive genetic testing. Genetic testing for PC, done through a saliva kit, is currently provided free through the International Pachyonychia Congenita Research Registry at https://www.pachyonychia.org/patient-registry/.

When patients register with the patient advocacy group Pachyonychia Congenita Project (PC Project) through the PC Registry, not only are they able to receive genetic testing, they are invited to be part of the worldwide PC community, which gives them access to patient advocates, help from physicians who are knowledgeable about PC, monthly patient news briefs, a private social media group, and the opportunity to attend patient support meetings. With a disease as rare and isolating as PC, being part of the PC community is often beneficial and even life-changing for some patients and their caregivers.

What is the Treatment?

Currently, there is no effective treatment for PC. Several clinical studies and clinical trials are underway, supported by PC Project.

The most effective factor for PC care is consistent trimming of the nails and the calluses on the feet and sometimes on the palms of the hands. Known as “debridement,” this trimming must not leave the nails too short or too long, and the calluses not too thick and not too thin. When inflamed, cysts may need to be lanced, drained or removed by a physician. As the hyperkeratosis may occur as a reaction to stress or pressure, many patients have found ways to lessen the trauma to feet and hands through special shoes, socks, gloves, insoles or orthotics, crawling, canes, crutches, and other walking aids.

More information and help can be found at www.pachyonychia.org

Why are the images hidden by default? Can I change this? ? 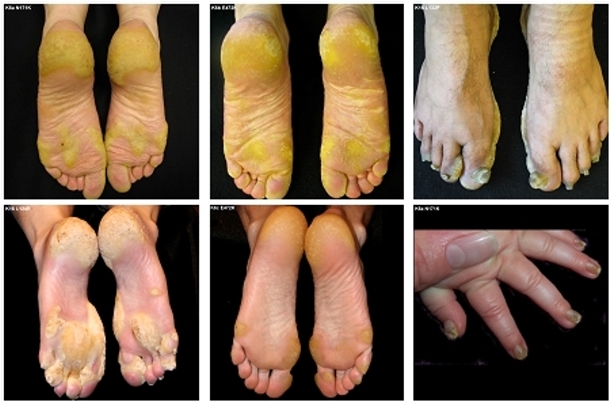 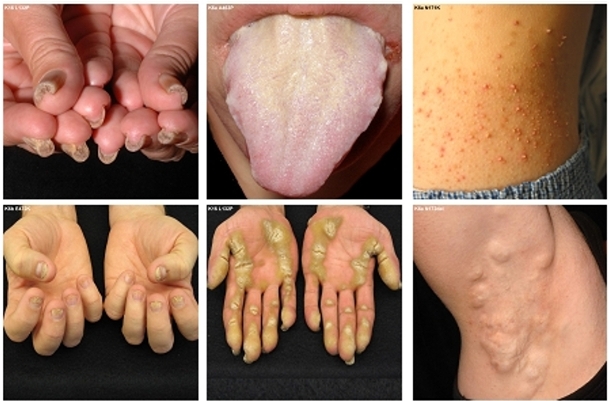 All images are copyrighted by FIRST or used with proper consent. They may not be downloaded or re-used for any purpose.

This information is provided as a service to patients and parents of patients who have ichthyosis. It is not intended to supplement appropriate medical care, but instead to complement that care with guidance in practical issues facing patients and parents. Neither FIRST, its Board of Directors, Medical & Scientific Advisory Board, Board of Medical Editors nor Foundation staff and officials endorse any treatments or products reported here. All issues pertaining to the care of patients with ichthyosis should be discussed with a dermatologist experienced in the treatment of their skin disorder.