Darier Disease - My Skin, My Pain 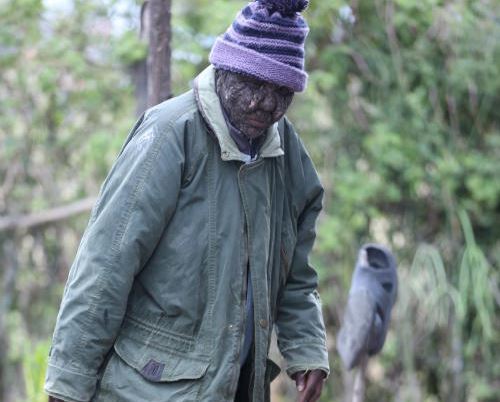 Onesmas Mwanzi, 44, suffers from Darier disease. The condition manifested at the tender age of eleven. What started out as a small patch on his face as a young boy has left Onesmas Mwanzi, 44, a lonely man with marked skin. His skin is thick and dotted with lesions all over his body. Mwanzi, once an outgoing man, has become a recluse in his home in Nakuru’s Greensteads estate. He is now incredibly introverted, avoids eye contact and shows resistance to participating in conversations.

“I am covered in cloth from head to toe to cope with the stigma that surrounds me. I have resolved to confine myself in the house, limiting my walks to avoid being a bother to society including my own siblings who see me as a curse,” he says morosely. “How can I even hope to start a family?” he asks.

But Martha Kyalo, his main caregiver has never left her brother’s side.

“I do my best to get him the treatment he needs, though the costs do run up quite a bit. We also have to make hospital visits twice a month,” she says.

Mwanzi isn’t cursed, he suffers from Keratosis follicularis, also known as Darier disease. It is a rare, genetic disorder where the skin thickens and forms a rough crust on the surface.

He was only 11 when it began. “First, it was a discolored patch on my face, then scattered rashes all over. Then they spread to other parts of my body and formed pimples. At the hospital, I was put on some drugs, but the pimples didn’t disappear. Instead, they spread and only grew bigger,” he says.

This made life difficult for the little boy on the edge of puberty.

“Even my close friends started staying away. My life began falling apart then,” he says, matter of factly. Years later, a local administrator would warn him to stay away from the public as he posed a health threat and when he was found outside, he was arrested.

Mwanzi has tried hundreds of ointments for pain relief, especially when the skin starts peeling off, but nothing has worked so far.

Dr Beatrice Etemesi , a dermatologist at Rift Valley Provincial General Hospital explains that a patient suffering from the disease forms thicker skin that interferes with the mechanism of skin, which starts to shed off because of abnormal cells within the skin.

“Affected individuals develop skin lesions that consist of thickened, rough bumps on the skin. The disease has no cure but can be managed depending on the severity the patient presents,” she explains.

Early signs of development are the formation of simple rashes on the face that further spread to other parts of the body including the mouth, anus, armpits and genital areas.

A diagnosis of Darier disease is made based upon a thorough clinical evaluation, a detailed patient history, identification of characteristic findings and microscopic examination (biopsy) of affected skin tissue.

A biopsy may reveal the abnormal formation of the protein that makes hair, nails and skin (keratin) and failure of cells to join each other properly.

“If a patient delays seeking medical attention, they can develop serious symptoms including itching of the skin and unpleasant smell, more so in moist areas where the condition flares up,” she says.

Etemesi explains that while Darier disease has no cure, medics try their best to restore the integrity of the skin to its original state.

“In mild cases, we can use some type of acid as a gel or some topical tretinoin that reduces skin cracking and the associated unpleasant smell.”

Severe conditions are managed with oral tablets which contain vitamins that dry the skin and boost the skin’s shedding.

“Mwanzi’ condition is severe and for him we use urea to boost skin shedding and prevent unpleasant smell,” she says.

Mwanzi goes for clinical check-ups every two months where his liver is checked, cholesterol levels monitored, and red blood cells count checked to prevent heart-related infections. According to Etemesi, Mwanzi visited a specialist when the condition was advanced, making his condition especially difficult to manage.

“Just like heart failure, members of the public should know we have skin failure that requires regular check-ups to prevent diseases at early stages of formation.”

Darier disease affects males and females in equal numbers. It is estimated to occur in one in 36,000 in the general population. The disorder usually becomes apparent during the second decade of life, but has developed in individuals as young as four and older than 70.

In Kenya, a patient needs an average of Sh60,000 in a month to treat and manage the condition. This includes cost of drugs and general clinical management.

“But the tablets can cause some undesirable effects on patients like having dry eyes and mouth, and thus one needs close monitoring by a dermatologist.”

The drugs are supposed to reduce thickening of the skin. If the skin is too thick, it cracks causing it to itch and smell a lot more. “Basically, the skin smells because of an increased number of ordinary skin bacteria that grows on affected areas. This can be reduced with use of drugs,” explains Etemesi.