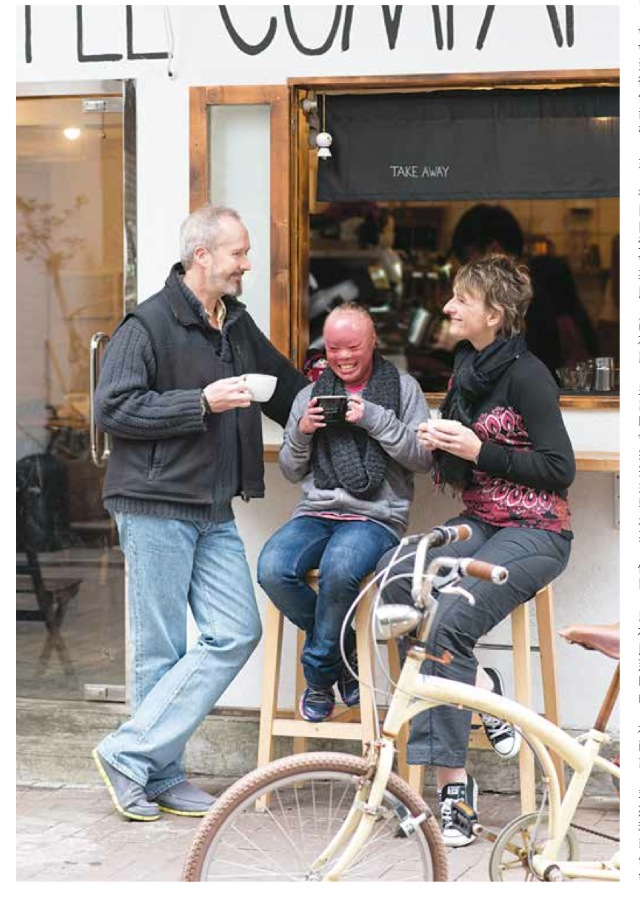 Meet the Extraordinary Family of The Girl Behind the Face

We are delighted to introduce Rog, Tina and Mui Thomas, an extraordinary family from Hong Kong who are challenging attitudes, raising awareness, and inspiring women and men the world over. Their book, The Girl Behind the Face, written by Rog Thomas from Tina's perspective, is a story of how three people became a family, the obstacles they overcame and the choices that had to be made along the way. It champions Mui's resilience and strength, all while empowering others along the way. In the words of Tina Thomas, "It is what love is."

‘(Paragraph below is an excerpt from The Girl Behind the Face by Rog Thomas)
Sai Kung in the eastern New Territories of Hong Kong is a surprise, a breath of fresh air, a relaxation, a break, a quality of life; Sai Kung is coffeehouses, bars, little bakeries, eclectic eateries, seafood restaurants and al fresco dining; and beyond the town itself, Sai Kung is rugged beauty: rolling hills, uninhabited islands and white sand beaches; wild monkeys, barking deer and feral pigs, and cows that wander through the streets. Sai Kung is a world away from the picture postcard images of Hong Kong: the hustle and bustle and towering glass skyscrapers of downtown Central; the “girlie” bars of Wan Chai made famous by Richard Mason’s The World of Suzie Wong; and the madding crowds of densely populated Mong Kok.

(Excerpt below is an adaptation from The Girl Behind the Face by Rog Thomas)
SAI KUNG is also where my wife Tina and I raised our daughter, Mui. We became Mui’s parents quite by chance.

It was summer and Tina suggested we volunteer for a couple of weeks with young children. It sounded fun. We were introduced to Mui, an abandoned one and-a-half year old Hong Kong Chinese girl with a rare deforming and life threatening skin disorder called harlequin ichthyosis. We looked forward to having Mui visit us in Sai Kung.

But each time we visited Mui in the hospital where she lived, she screamed and turned away, and ripped off her skin and tore out clumps of hair until she was a bloody mess. For Tina, winning Mui’s trust quickly became a stubborn battle of wills. And each time Mui would finally calm down, she was inseparable from Tina, like a baby kangaroo in her mother’s pouch.

It wasn’t until the beginning of the following year that this battle was won and Mui finally came to visit.

Twenty years ago, caring for a child who looked as different as Mui did in Hong Kong was a constant challenge: people in wheelchairs were stared at. Taking Mui outside meant walking the gauntlet of staring and occasional cruelty: sometimes people shouting insults at us, sometimes people screaming at Mui. Once, someone spat in Tina’s face.

But Sai Kung has always had a strong sense of community – although connecting with the warmth and kindness of the local Chinese population meant making a bit of an effort. It began with our first ever walk through Sai Kung.

In the market curious Chinese women, men and children clustered round us. Tina smiled and said jo san – good morning – to the different faces in the crowd and told Mui to say hello, too. An old lady pushed forward and demanded to know what had happened to Mui. Tina told her it was a skin disorder and added, Mui’s Heung Gong yan – a Hong Kong person. The woman smiled and gave Mui sweets. Tina told Mui to say thank you and give the woman a hug, and with a hefty nudge of encouragement from Tina, Mui hugged the woman, who smiled, and the cluster of people was soon smiling, too.

When we left the market Tina told Mui to wave and blow a fei man – a ‘flying kiss’ – and everyone smiled and waved and blew kisses back.

In the street, some people stopped stiffly, some stared silently, some screwed up their faces. Some people recoiled or jerked their heads back like they’d been scalded. We walked on and smiled at them, said hello, made eye contact and sometimes held their stare, or chose not to see them.

Treating Mui as an ordinary child seemed to put the people we bumped into in Sai Kung at ease. As she has grown up, folks in Sai Kung have tended to embrace her and regard her as a sweet and confident girl.

How we came to adopt this courageous little girl, how our daughter grew up to inspire ordinary men and women across Hong Kong, how she won over a British prime minister, billionaires and royalty with her dynamism and spirit, and how cyberbullies drove her to the brink of suicide – that is our Hong Kong story. We’ve shared it in a book: The Girl Behind the Face and we have now signed with a US literary agent in Dallas, Texas.

Our aim is to challenge attitudes, empower others and raise awareness of commitment, cyberbullying and visible differences.

(This article was first published in: the Cathay Pacific Airways in-flight magazine.) Find out more about their book, The Girl Behind the Face, and their motivational speaking engagements.