How to make Ichthyosis (Fish Scale Disease) in Fish (2010) 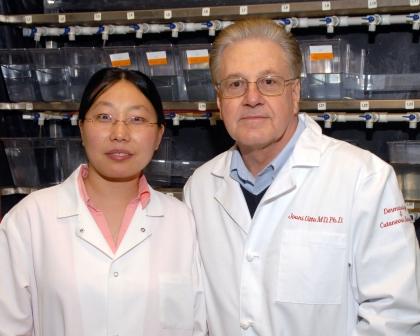 Ichthyosis (derived from the ancient Greek word meaning “fish”) refers to a group of disorders in which skin is dry and scaly often from birth. There is quite a lot of variability in the severity of this skin condition: In the milder forms skin is just dry, especially during winter months, while in the most severe cases, large scales are present which can affect the individual’s well being and survival. Through the work of several investigators, it is now clear that alterations in many different genes can cause ichthyosis in patients, and the types of mutations and the genes harboring such mutations can explain the tremendous variability in the disease severity.
For many forms of ichthyosis, there is no effective treatment, and different animal models have been developed so as to allow testing of new treatments. The “gold standard” of such models is mouse which can be manipulated at birth so that they develop ichthyosis, and these mice can then serve as a target for different testing protocols. However, the drawbacks of the mouse model include the long time that it takes to develop a mouse with the disease, small number of pups being born to each mother, and the cost of maintaining the mouse colonies for testing. In an attempt to create an alternative, more expedient, model system to study ichthyosis, we have recently turned our attention to zebrafish which has several benefits over the mouse systems (Figure 1A). For example, the zebrafish develop very rapidly so that all major organs, including the skin, develop in 5-6 days after fertilization. Zebrafish also produce a large number of embryos, approximately 50-100 per female each day, and maintaining these zebrafish colonies is very cost efficient.

One of the advantages of zebrafish is that we can change their genetic makeup at one-cell stage by easy manipulation in the laboratory. We have recently made efforts to prevent the synthesis of protein known as ABCA12 which is missing in patients with harlequin ichthyosis, the most severe form of the disease. Examination of the top layer of the skin in normally developing zebrafish reveals well developed structures, so-called microridges, which look like fingerprints in humans (Figure 1B). If the synthesis of the ABCA12 protein is inhibited, the microridge development is perturbed, and instead, the top layer of the fish skin shows abnormal scale-like structures, somewhat similar to patients with different forms of ichthyosis (Figure 1C). 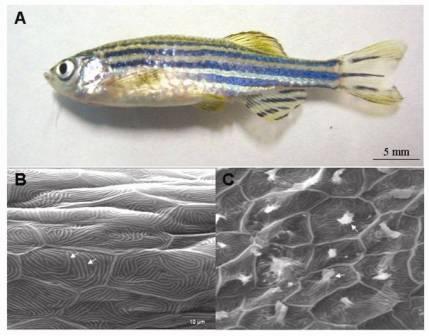 Thus, the zebrafish provides an expedient model system, which develops abnormalities in the top layer of the skin. These animals now serve as a platform to study the mechanisms of the skin changes and to test different treatment modalities for use in patients with ichthyosis.
Figure 1. An adult zebrafish can grow up to about 2 inches in length (A). Examination of the outer layer of the skin in a normally developing zebrafish reveals the presence of microridges (like fingerprints) pointed out by arrows (B). In the skin of a fish in which ABCA12 protein expression is inhibited, the microridges are poorly developed, and there are scale-like structures similar to patients with ichthyosis (C).
Share This Page: