Matt L. is a senior in high school in Daytona, Florida.  He is a 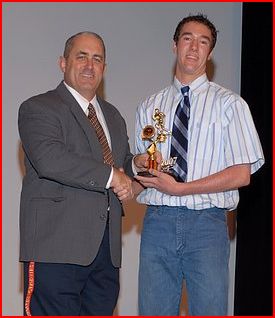 defensive lineman for the Taylor High School Wildcats.  He is popular in school.  He has CIE.

As a four year old, Matt was aware that he looked different from the other kids.  If any of those others kids would tease him, he would tell his mother, “Mom, they’re the ones with the problem, not me.”  As he grew, Matt approached his ichthyosis almost as a blessing.  It let him know who his true friends are.  Now as a senior, Matt is an active leader on his football team and looks out for the underdog.  He also won the defensive player MVP award for his team.

When Matt first started playing for Coach Doug Pettit, the Taylor High football coach, Pettit would become concerned when Matt’s face reddened.  He was worried that Matt was over exerting himself.  The coach now understands that the overheating is part of Matt’s condition and can be monitored.  Matt cools down just by pouring water over himself during breaks.  When he was younger, he wore a cooling vest to keep cool, but found it too constrictive.