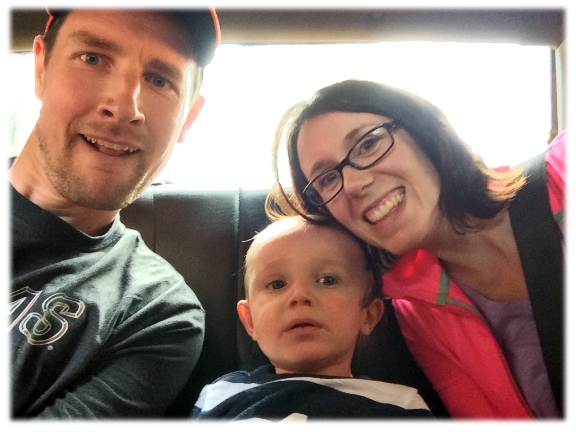 HOUSTON, TX (January 2015) – When Ruairi Sanders was born in 2012, parents Andrew and Heather knew that something was different about his skin, but they weren’t sure how severe the difference would be.  After receiving a diagnosis of epidermolytic ichthyosis, Andrew and Heather found information about the Foundation for Ichthyosis & Related Skin Types (FIRST) and joined FIRST-sponsored Facebook groups to gain as much knowledge and support for raising their son as possible.  They were soon immersed in the FIRST community, hosting fundraising events at the Houston Astros games, and attending their first National Family Conference in Indianapolis during the summer of 2014.

A resident of Cypress, Texas, Andrew ran his first Houston half marathon in 2013, shortly after his son was born.  Heather ran her first marathon in 2014 and beat his time, so Andrew has extra motivation for 2015.  He is running the 2015 Houston Marathon, January 18, 2015, “in hopes that I can raise some money to help support FIRST by way of thanks for the support they have given us.  I’m sure I can get some of my friends to sponsor me on the basis that a half marathon is a challenge for anybody, but particularly a former basketball player of 6’8″!  My long legs are not really made for running.”

Andrew has stated, “In the longer term, I’m sure like most people reading this, I really hope for a cure.  I’m confident that a good amount of research into genetic conditions is already happening and that people who deal with ichthyosis can benefit from scientific discoveries elsewhere.  Obviously this all comes down to money.  Perhaps the money I raise can also be put towards research.  But perhaps just raising a little awareness will also do some good!”

“There is no known cure for ichthyosis, only treatments,” said Jean Pickford, Executive Director of FIRST.  “It is our hope that with funds raised through Andrew’s efforts, we can continue to conduct more extensive research and provide services to the members of FIRST taking us one step closer to finding a cure and better management of the disorder.  We can’t thank Andrew and Heather enough for their efforts and support.”

According to FIRST, each year, more than 16,000 babies are born with some form of ichthyosis, of those, approximately 300 are born with a moderate to severe form.  This disease affects people of all ages, races, and gender. The disease usually presents at birth, or within the first year, and continues to affect the patient throughout their lifetime.

About the Foundation for Ichthyosis & Related Skin Types, Inc.®
The Foundation for Ichthyosis & Related Skin Types, Inc.® (FIRST) is the only nonprofit foundation in the United States dedicated to families affected by the rare skin disorder ichthyosis.  Approximately 300 babies each year are born with a moderate to severe form of ichthyosis.  FIRST educates, inspires, and connects those touched by ichthyosis and related disorders through emotional support, information, advocacy, and has supported more than $1.4 million in research funding for better treatments and eventual cures.  For more information, call toll-free at 1.800.545.3286 or visit www.firstskinfoundation.org.