Harlequin ichthyosis is a rare congenital disorder, which causes restrictive circumferential encasement of the trunk and limbs. Patients usually develop compartment syndrome and sequential cyanosis of limbs and digits, leading to autoamputation. We report a case of harlequin ichthyosis in which all digits were preserved with an early escharotomy-like procedure. A 33-6/7-week-old preterm girl presented with whole body hyperkeratosis, constrictive bands on neck, chest, abdominal, limbs, and developed compartment syndrome. On the second day after birth, distal digits progressive swelling and ischemic change occurred. An escharotomy-like procedure was performed on all 4 extremities to the distal digits. All distal phalanges and nail plate were well preserved at 5-month follow-up. We concluded that for prevention of digits autoamputation in harlequin ichthyosis, early detection of compartment syndrome is necessary and an escharotomy-like procedure should be performed as soon as possible when ischemia occurs.

Harlequin ichthyosis (HI) is an extremely rare autosomal recessive genetic disorder. It is a severe form of congenital ichthyosis with an incidence of approximately 1 in 300,000 live births. The patient's skin of the entire body is commonly hyperkeratotic, with hard, diamond-shaped plaques separated by fissures, and they may also suffer from eclabium, ectropion, and auricular deformity [1]. In addition, this disorder causes restrictive circumferential encasement of the abdomen and chest, leading to respiratory failure due to lung expansion restriction by tight chest membranes [2]. After birth, resultant limb edema may lead to compartment syndrome and sequential cyanotic changes of the limbs and digits, which may lead to autoamputation [3]. Surgical intervention with linear band incisions reportedly prevented digital from autoamputation [4]. However, the timing of the procedure remains unclear due to limited case experiences. We report a case of HI in which all the digits were salvaged from autoamputation because of early detection and prompt surgical management of the ischemic digits.

A preterm girl was born at gestational age of thirty-four weeks and weighed 2085 g at birth.

She appeared to have fissured, armor plate-like hyperkeratosis, severe eclabium, ectropion, and small concha-type bilateral auricular malformations (Fig. 1A). Constrictive bands were found near the joints of the extremities, including the elbows, wrists, knees, ankles, metacarpophalangeal joints, and metatarsophalangeal joints. The neck, chest, and abdomen had a layer of thick hyperkeratotic skin that caused the restriction of breathing. The infant was intubated and admitted to the neonatal intensive care unit. 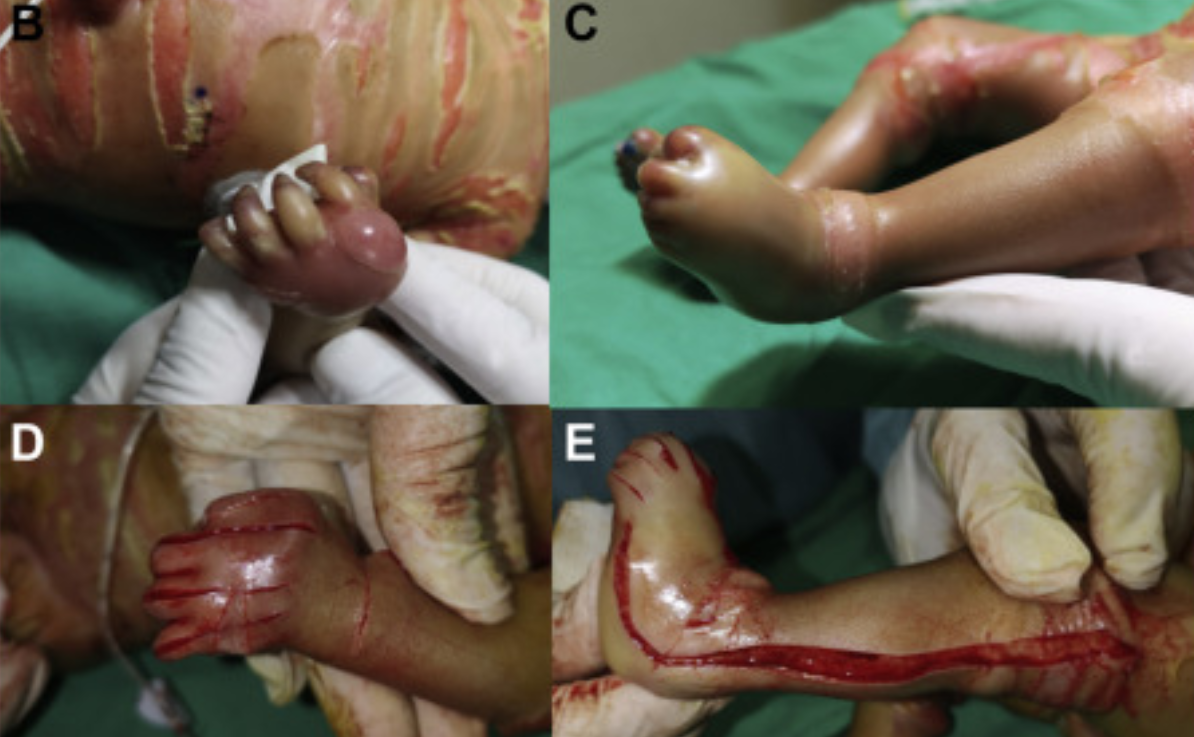 Presentation of harlequin ichthyosis and escharotomy-like procedure. At birth, the patient showed fissured armor-plate hyperkeratosis with severe eclabium, ectropion, and bilateral auricular malformation (A). The hand constrictive bands at the metacarpophalangeal joints with severe edematous changes in distal digits and cyanosis (B). The lower extremity showed constrictive bands at the ankle and metatarsophalangeal joints (MTPJs) that also caused edema and poor circulation (C). The incision line extended from the wrist to the distal interphalangeal joints (DIPJs) of all fingers(D). In the lower extremity, the incisions extended from the knee, lower leg, ankle, and MTPJ to the DIPJ to ensure that all constrictive bands had been released. After the surgical procedures, all digits were well reperfused (E). Chest (F). and neck (G). restrictions were released to improve breathing and lung expansion.

On the second day after birth, progressive swelling was noticed in all extremities, especially over the dorsum of the hands and feet. All fingers (Fig. 1B) and toes (Fig. 1C) showed deviated alignment, with severe edematous and ischemic changes due to constrictive bands. Due to the clinical suspicion of compartment syndrome, escharotomy-like procedures were performed under intravenous sedation. Skin incisions were made using a No. 11 blade on the bilateral lateral forearms, lower legs, wrists, and ankles. Further incisions were made distally and subsequently passed through the dorsal skin of the hands, fingers (Fig. 1D), feet, and toes (Fig. 1E). The incision line extended to the distal interphalangeal joints (DIPJs) of all digits to ensure that all constrictive bands were released. Immediately after the surgical procedures, all digits showed reperfusion. At the same time, chest and neck restrictions were released, and lung expansion improved (Fig. 1F and G). Hemostasis was performed using compression with gauze and elastic bandages. The whole exon sequencing indicated single exon site mutation of ABCA12 gene located on chromosome 2, which was compatible with the phenotype of HI. The histologic changes of the skin, including papillated epidermis with thick compact hyperkeratosis and irregular acanthosis, also supported this diagnosis. All distal phalanges of the fingers (Fig. 2A and B) and toes (Fig. 2C and D) were preserved at 5-month follow-up.

Literature regarding the surgical management of HI is scarce. To the best of our knowledge, only two case reports have focused on the importance of neonatal surgical timing, indications, risks, and operative methods in HI. In 2014, Tontchev et al. reported a case of HI that developed into compartment syndrome at day 3 after birth, followed by progressive ischemic changes with impending gangrene. They introduced a technique of linear band incision using a new escharotomy-like procedure that resulted in reperfusion of the digits and prevented further necrosis on day 7 [4]. In 2016, Pet et al. also reported a case of HI requiring surgical release of constrictive bands. However, although the neonate underwent bilateral hand and finger surgical release on day 11, ischemic process has been irreversible, and autoamputation occurred near the DIPJs of the left index, middle, ring, and small fingers.

The authors believe that the timing of surgical intervention is one of the crucial factors for the prevention of autoamputation. Initial ischemic discoloration of the fingertips was difficult to differentiate from plaque maturation, leading to the misdiagnosis of early cyanotic changes before they became irreversible. Hence, a low threshold for the release of the encased limbs was suggested [5]. Our patient received prompt surgical intervention on day 2 of life due to the early diagnosis of compartment syndrome, which allowed preservation of all digits without any tissue loss. Therefore, we believe that surgical intervention should be performed as early as possible to minimize tissue loss leading to autoamputation.

The length and depth of incisions differ among cases. We made shallow incisions on the dorsal skin of the hands, finger, feet, and toes instead of ventral incisions to prevent possible flexor tendon injury. Since the patient only weighed 2085 g, the digits were small, slippery, and difficult to immobilize [5] for bilateral lateral incisions. Iatrogenic injury can occur when incisions are placed directly over the tendons. However, full-thickness skin incisions were performed in the lateral aspects of bilateral forearms, lower legs, wrists, and ankles for the complete release of constrictions following the concept of escharotomy procedure that is usually performed on burn patients. Bilateral chest wall release was also performed in a similar fashion, with improvement of lung expansion. Lastly, we also released the tight encasement around the neck; there had been no previous descriptions of neck release performed for HI cases in the literature. This incision improved the airway patency as well. We believe that the surgical sites and incision depth should be determined in order to achieve an adequate release.

We performed the procedure under intravenous sedation while the patient was still intubated. In the literature, local anesthesia was used in the absence of intubation, with 0.25% lidocaine and epinephrine to prevent oversedation [5]. If simultaneous extensive escharotomies are necessary, the possibility of lidocaine toxicity should be taken into consideration. When administering local anesthesia for multiple body sites, excessive fluid injections may also exacerbate swelling of the extremities as well.

Lastly, hemostasis is also an important issue. Since HI patients are usually premature, their weight is relatively low. An infant weighing 2085 g has an estimated total blood volume of 170 mL. Blood loss of more than 50 mL would lead to grade III hemorrhagic shock. Although bipolar cauterization has been used in the literature [5], compression with gauze and elastic bandages is safe and adequately sufficient for hemostasis in our clinical experience.

The authors declare no conflicts of interest.