How to Ease Social Isolation During the Pandemic

The elderly and people with chronic health conditions are vulnerable to loneliness, which can harm emotional and physical health. Learn how to loosen its hold. 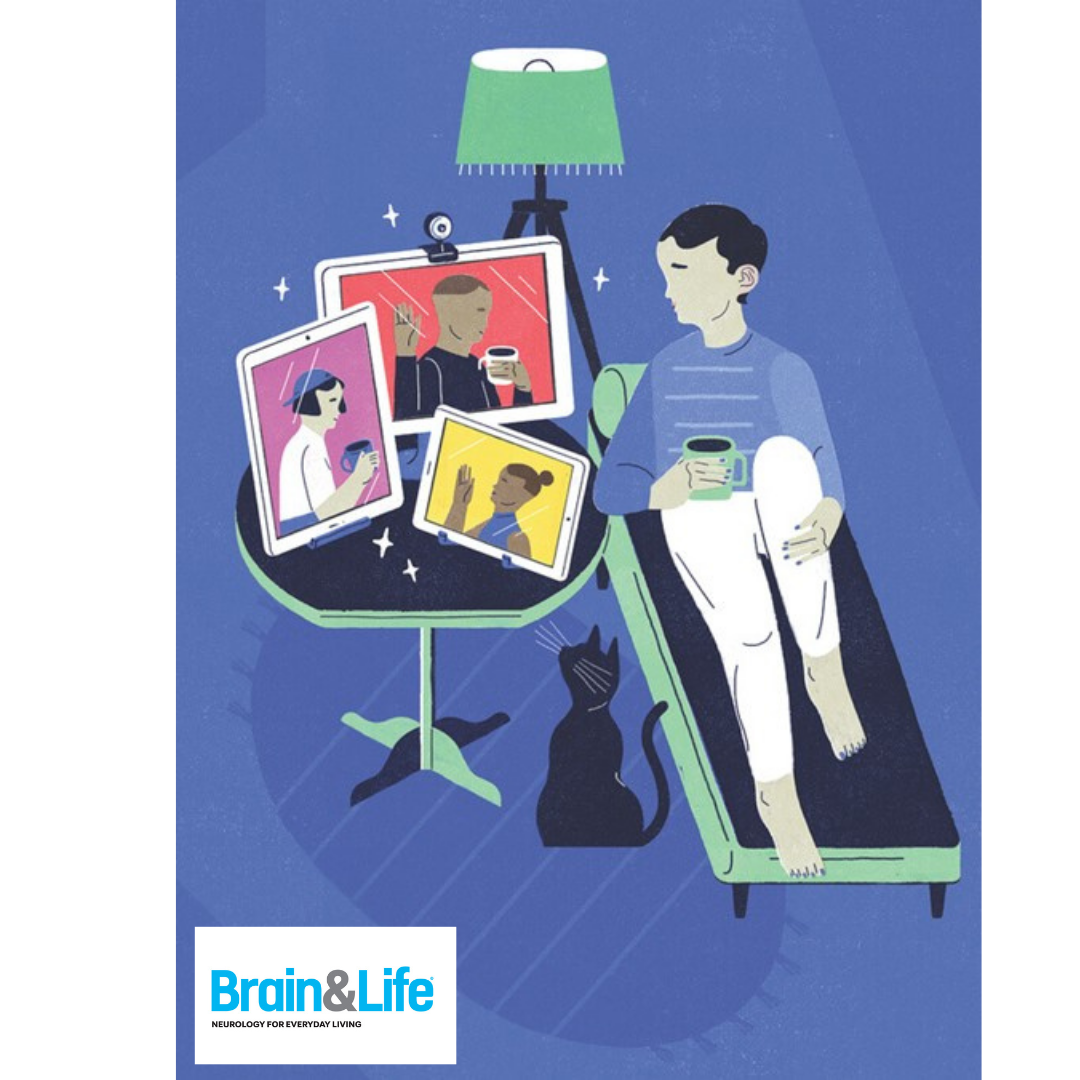 Nights are the worst for Donna Brown, 69, a retired nurse who has tinnitus, a neurologic condition that causes ringing or other sounds in the ear. "Loneliness comes on when the world is asleep and I'm wide awake listening to the constant noises in my ears. I also feel lonely when I try to share my experiences with others, and they look at me blankly because they can't understand what I'm going through," says Brown, a musician and author who lives in Pearce, AZ, with her husband, Gary, and their dog, Caddy.

For Nathan Todd, 35, who has cerebral palsy, loneliness has been a lifelong experience. "When you navigate the world with a disability, the narrative that you're a burden to people makes you feel lonely," explains Todd, founder of No Label Defines Me coaching, who lives with his mother in Charleston, SC. The first step in countering his loneliness is identifying it as it happens. "It pops up when I'm going through periods of physical pain," he says. "It's about wanting to be understood, but it's hard for people to relate to the experience of cerebral palsy."

The loneliness that Todd and Brown describe differs from social isolation. Isolation is based on how many social relationships a person has, whereas loneliness results from having fewer relationships than one desires. "Loneliness describes how we think about our social relationships and if they satisfy our need for connection and belonging," explains Louise Hawkley, PhD, senior research scientist for the research organization NORC at the University of Chicago. It's also different from being alone but content.

While both Todd and Brown say their loneliness has intensified since the start of the pandemic, they may not be typical. Results from studies on whether loneliness has been on the rise because of COVID-19 are mixed. One such study, published in the June 2020 issue of American Psychologist, found no significant changes in loneliness across three time periods: before the outbreak, in late March, and during stay-at-home orders. A majority of the 1,545 respondents felt that support from other people had increased during the pandemic.

By contrast, a survey by Indiana University researchers of 1,010 adults in April 2020 found that symptoms of loneliness were high. "Although we didn't have data on these same people prior to the pandemic, we can say that both loneliness and depression were much higher than had been reported in other recent studies of mental health in America before 2020," says Molly Rosenberg, PhD, MPH, assistant professor of epidemiology and biostatistics at the Indiana University School of Public Health in Bloomington.

There are nuances of loneliness that can make each experience unique, says Lis Nielsen, PhD, director of the division of behavioral and social research at the National Institute on Aging. Emotional loneliness is a lack of intimacy or attachment. Social loneliness involves unsatisfying personal connections or a feeling of not belonging. Existential loneliness reflects a lack of meaning or a sense of being separate from others and the world. Loneliness can be transient or chronic, situational or reactive. It can happen at any age and whether or not people are alone, Dr. Nielsen says.

During the pandemic, certain groups are more vulnerable than others, says Katherine Peters, MD, PhD, FAAN, associate professor of neurology and neurosurgery and director of supportive care for the Preston Robert Tisch Brain Tumor Center at Duke University. "Children and adolescents are experiencing more loneliness compared to previous rates than the elderly," she says. "This means we weren't combatting loneliness as well as we should have before the pandemic," given that older adults aren't perceiving much of a change in their level of social engagement.

But loneliness is nothing new. "I think there has been a pandemic of loneliness for the last 20 to 30 years," says Dilip Jeste, MD, professor of psychiatry and neuroscience and director of the Center for Healthy Aging at the University of California San Diego. In a 2018 survey by the Kaiser Family Foundation, 22 percent of adults in the United States indicated that they often or always feel lonely, left out, or isolated from others. Dr. Jeste's own research of adults found that loneliness tends to be worse among people in three age groups: late twenties, mid-fifties, and late eighties. People with neurologic conditions also may be more susceptible because they may have challenges with communication, such as aphasia, and physical function, which can lead to isolation and loneliness, says Dr. Peters.

Over the years, and especially during the pandemic, Donna Brown and Nathan Todd have found ways to manage their loneliness. Brown relies on meditation. She also teaches yoga—with proper physical distancing—two days a week, which has been an unexpected salve. "It's therapeutic for me because I feel like I'm doing a service for other people," says Brown, who also belongs to an online support group for women. Another helpful tactic: shifting her outlook on loneliness. "Loneliness inspires me to reach out to people. It has helped me be less introverted," she says.

When Todd gets into a funk, he calls a friend or an "accountability buddy," someone he feels safe talking to. "Loneliness is the signal for finding human connection," he says. Lifting weights, writing in a journal, and doing breathing exercises also help him "get out of a loop of negative self-talk and into a calm state," he says.

Whether you are lonelier now because of the pandemic or felt lonely before it, you can take steps to address the feelings. Start by facing them. "If you say 'Yes, I'm lonely' and understand what's going on and give it a name, you can figure out what to do about it," says Ami Rokach, PhD, a clinical psychologist who teaches in the psychology department of Toronto's York University. "Try to understand why you feel lonely: Is it because of the way you present yourself to people or because you're afraid of intimacy? Or is it because you feel powerless?"

Once you've identified the underpinnings of your loneliness, consider one or more of these strategies for alleviating it.

Cognitive Behavioral Therapy. Cognitive behavioral therapy (CBT) is a short-term solutions-oriented therapy that teaches you how to modify negative thoughts about other people and social interactions, which can help you feel more motivated and open to engaging with others. A study in a 2019 issue of the International Journal of Environmental Research and Public Health found that a CBT app led to a significant reduction in loneliness among older adults. "One theory is that lonely people process social stimulation differently—they may perceive it as less friendly and react to it differently, perhaps becoming hypervigilant," says Dr. Nielsen. Changing such thoughts and reactions can increase social connections and decrease loneliness.

Enrichment. Pursuing a new activity may give your life more meaning, says Dr. Jeste. It also could lead to socializing with others who share that interest. Now is the time to learn a language or musical instrument, read challenging books, or master a new form of technology or creative activity. "Every crisis is an opportunity," says Dr. Jeste. If you can become part of a collective through that new activity—by joining an online interest group or themed book club—you'll enhance your sense of connection, says Dr. Peters. Developing new talents can help you grow and thrive.

Physical activity. Exercise reduces loneliness by improving brain function and emotional regulation, distracting you from thinking about what you're missing in life, providing a sense of purpose, and relaxing the body and mind, Dr. Jeste says. A 2020 study in Maturitas showed that regular exercise reduced perceptions of loneliness and improved cognitive function among nursing home residents.

Mindfulness. Paying attention to, accepting, and learning to live with your feelings of loneliness without judging or reacting to them can help mitigate them. A 2019 study in the Proceedings of the National Academy of Sciences of the United States of America found that participating in a two-week smartphone-based mindfulness program reduced loneliness and increased social contact. "Mindfulness connects you to the present and can help you distinguish between being alone and being lonely," Dr. Rokach says.

Connect in person. A 2019 study in the American Journal of Health Promotion found that having social support and meaningful daily interactions with others were strongly associated with lower levels of loneliness while excessive use of social media and texting were associated with greater loneliness. "Social media allows people to be in contact but without connection," says Janet L. Jankowiak, MD, a behavioral and geriatric neurologist in Boston who was not involved in the study. "It's the quality of the relationships that's key in alleviating loneliness."

Physical touch is important too, says Dr. Rosenberg. In her own research, which includes a recent study on loneliness, she found that interactions involving physical contact (hugging household members or sexual contact with a partner) seemed to be more protective against depression and loneliness than virtual connections.

Remember that social relationships are a two-way street, says Dr. Nielsen. "Reach out to others and make them feel needed and loved," she advises. Ask your neighbors how they're doing and if they need anything. Try to take an active role in changing your level of social involvement.

Gratitude. A study in a 2019 issue of Research on Aging found that when older adults engaged in a daily writing activity focused on what they were grateful for, their feelings of loneliness lessened over a three-week period. And if you express your gratitude to other people, "it may lead to an upward spiral, eliciting positive responses in the other person and increases in positive thinking and feelings of greater social connection in you," says Julianne Holt-Lunstad, PhD, professor of psychology and neuroscience at Brigham Young University in Provo, UT.

Wisdom. A complex trait that encompasses self-reflection, empathy, compassion, and spirituality, wisdom is inversely associated with loneliness, according to research by Dr. Jeste, who has studied wisdom for the past 15 years. "People who score high on wisdom are not lonely," he says, adding that people can acquire wisdom by developing greater compassion and the ability to recognize emotional triggers and respond to them appropriately.