The last major type of inheritance is X-linked recessive.  Our example here, x-linked recessive ichthyosis, gives by its name a clear description of its genetic pattern: it is recessive and it is linked to the X chromosome.

As we discussed in the Introduction, chromosomes work in pairs, and the pair that is responsible for a person's sex is the XX (female) or XY (male) pairing. Females have two X chromosomes; males have one X and one Y. We also mentioned earlier that genes are attached to chromosomes; you can think of them as hitchhikers or riders who will take only one particular bus or subway train. Specific genes appear only on certain chromosomes, and X-linked genes appear only on X chromosomes. And finally, we have already discussed recessive genes - they can be bullied by another, more dominant gene for the same trait. 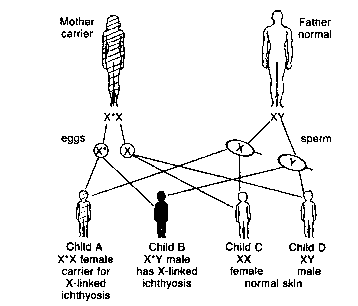 With X-linked ichthyosis, the gene responsible for the disorder can be bullied by a gene that overrides it, a gene that would also be attached to an X chromosome. Since women have two X chromosomes, they have two genes relating to the trait of X-linked ichthyosis. If one of these genes is abnormal and causes the disorder, the other gene, which overrides it, is present on the other X chromosome and dominates. The woman, therefore, has normal skin.  All women have two X chromosomes and therefore have at least one gene that overrides the gene for this disorder. Since the gene for this disorder is recessive, women do not have X-linked Ichthyosis.[16]

Men, however, are XY. If they receive an X-linked ichthyosis gene on their one X chromosome, they have no other, "normal" gene to override it because there was no other X "car" for that gene to ride in. He has just one recessive gene, but there is no other gene to keep it in line so it displays its trait. The result for him is X-linked ichthyosis.

For the female carriers of the disorder (the only ones who can transmit it directly to their children) the result is a risk identical to that of any other recessive disorder – i.e., one in four (25%). But in this mode of inheritance, the affected person will always be male, and the carriers will always be female.[17] The man who has X-linked ichthyosis will have only unaffected sons (they would get their X chromosome from their normal mother); and these sons will not be carriers, either.  But the daughters of our X-linked ichthyosis man would all be carriers of the trait, although none would show the skin disease.  Thus  this couple can be reassured that their own children will not show the disorder,  but they could still worry about their male grandchildren.[18]

Because of the "invisible", female carriers, X-linked recessive disorders frequently appear to skip a generation or two. In diagnosing a particular type of ichthyosis, or in trying to determine if the spouse with normal skin is a carrier, a doctor or genetic counselor will ask about family history, often going back several generations. Knowing that ichthyosis has appeared in a family before, but only in males, would be a clue that the condition in the family may be X-linked ichthyosis.

Although it is said that women "do not get" X-linked ichthyosis, it is not impossible for a woman to get it. If a carrier (woman) married a man who had the disorder, it would be possible for a daughter of this union to receive two X*X* chromosomes-two recessive genes for the disorder. It is not impossible, just unlikely.[19] And yet again, the likelihood of it actually happening is vastly increased by marrying a relative.

Footnotes:
[16] The gene for X-linked ichthyosis is an interesting exception to the usual pattern of skin conditions that exhibit X-linked inheritance.  Most of the genes on the X-chromosome undergo lyonization during early embryonic life.  This is a process of  X-inactivation where one X chromosome in each female cell is rendered inactive (non-operative) as a mechanism to equalize the genetic input of male and female cells, since the Y chromosome is very small and contains few genes.  (In some instances too much genetic input is as bad as too little).  Because of this, many of the X-linked conditions causing skin diseases show up in women only on part of their body, in lines and streaks, like the pattern in epidermal nevi due to somatic mosaicism discussed in an earlier footnote.  Thus the condition manifests in skin cells where the X-chromosome carrying the mutant allele is the active X-chromosome.  Where the skin is normal, the X-chromosome carrying the normal allele is the active one.  In the FIRST family, Conradi-Hunerman-Happle syndrome and CHILD syndrome are examples of this pattern; these are considered  X-linked “dominant”  conditions, because the disorder is expressed with only one mutated allele (i.e.,“X* X”).  In contrast, the part of the X chromosome that carries the X-linked ichthyosis gene does not undergo X-inactivation; i.e., the genes in this small region remain active on both X chromosomes.  Thus female carriers of the X-linked recessive gene have one normal allele operative in all their cells and because the trait is recessive, do not exhibit skin disease.

[19] The likelihood depends upon the frequency of the condition in the population.  Although X-linked ichthyosis is uncommon in the general population, it is fairly common for a genetic disease, occurring in 1:2000 to 1:6000 males.  The chance of a male with X-linked ichthyosis marrying a woman carrying the gene mutation would be somewhat greater than this – because more carriers are generated than affected males.