It would be lovely to say that healthy genes are always dominant over unhealthy ones, but unfortunately that is not the case. In several of the FIRST family of disorders, genes for the skin disorder are dominant and overshadow the genes for healthy skin.  Epidermolytic ichthyosis (EI) will be used as the example in this section, but the genetics also apply to all other autosomal dominant traits. Among the FIRST family of disorders, epidermolytic ichthyosis (EI), keratitis-ichthyosis-deafness (KID) syndrome, pachyonychia congenita and Darier disease are some examples of dominant disorders following this inheritance pattern. 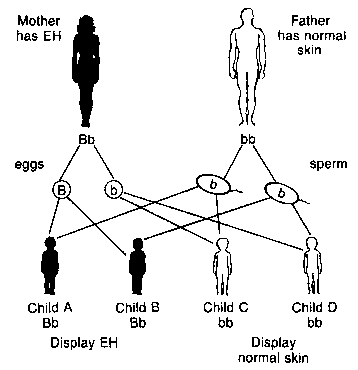 "Recessive" and "dominant" are not absolute terms in many instances. Genes for normal skin are dominant (“B”) when compared to genes for ARCI-lamellar ichthyosis or congenital ichthyosiform erythroderma (CIE). The normal skin genes are not so dominant, however, when they come up against a gene for a disorder like epidermolytic ichthyosis (EI).[10] Think of that grammar school playground bully again; he's not so tough when somebody from the high school comes to push him around. When comparing normal skin genes and those for epidermolytic ichthyosis (EI), the normal skin gene must now be represented by “b” and the genes for the disorder must be represented by “B”.

Thus, the chances of this person passing on the disorder are 50-50. The “Bb's” will have the disorder; the “bb's” will not. It is important to emphasize again, that the odds are the same for each pregnancy. This couple, for instance, if they have a child with epidermolytic ichthyosis (EI), cannot assume that they can safely have a second child without the disease because they have "satisfied the odds." Each pregnancy for this couple carries the same 50-50 odds.  Again, think about the odds of having a boy or a girl; they're exactly the same.

These genetics are relevant, however, for one of the dominant disorders in the FIRST family, ichthyosis vulgaris.  Mutations in the gene causing ichthyosis vulgaris[12] are extremely common in some populations.  For example, in European populations, 10% or more carry a disease-causing mutation in the ichthyosis vulgaris gene.  If they have one mutated gene (“Bb”), they may have a milder disease, sometimes with fine scaling, more like dry skin than ichthyosis – or they may show no obvious signs of carrying the gene,  while individuals with the “BB” genetic makeup exhibit ichthyosis vulgaris and other features of the disorder.[13]   This form of inheritance is called semi-dominant.  Using the playground analogy, one can imagine that the “B’s” are the kind of bully where if you meet one of them alone it may not go too badly for you, but when they are there together it is no fun.

Footnotes:
[10] Dominant disease-causing genes can have their effect in one of two ways.  First, the mutated gene may encode a protein that interferes with the function of the protein coming from the normal allele – this is termed a dominant negative effect.  This is the mechanism operating in epidermolytic hyperkeratosis (EHK) and Pachyonychia Congenita, for example.  Conversely, having only one normal allele may result in critical deficiency of the gene product, i.e., in the protein encoded by the gene – this mechanism is termed haplo-insufficiency.  Remember, in recessive traits, having one normal allele is sufficient.  In dominant disorders attributed to haplo-insufficiency, a single normal allele is not enough.  This appears to be the problem in Darier disease and in Hailey-Hailey disease.

[11] An “unusual” situation deserves mention here: genetic mosaicism.  Genetic mutations can occur in cells at any point in their lives.  If they occur in the DNA of eggs or sperm, all the cells of the developing person will contain the mutant gene.   If, on the other hand, the mutation occurs during early fetal development, sometime after fusion of the egg and sperm and after the fertilized egg has begun to divide into more cells, only the daughter cells of the cell that mutated will carry the disease-causing genetic mutation.  This person is a genetic mosaic – meaning that he/she has a mixture of cells, some that contain the new mutation (“Bb”) and some that do not (“bb”).  When someone is a genetic mosaic for a mutation in one of the EI-causing genes, the result can be an epidermal nevus.  This is an ichthyosis-like condition where the scaling is limited to just part of the body, typically forming swirling lines or streaks.  These streaks represent regions of skin that derived from a single embryonic mother cell.  If that mother cell also gave rise to daughter cells destined to form some of the germ plasm (i.e., the cells that give rise to eggs or sperm), then the genetic mutation (“B”) could be passed onto future generations.  But in that case, all of the offspring’s cells would carry the mutation (i.e., all would be “Bb”), and the child would have full-blown EI.  Rare cases have been documented in which a parent who had an epidermal nevus of the EI type (not all epidermal nevi are caused by mutation in the EI genes) had a child with full-blown EI.  Moreover, it is possible to have silent germline mosacism – i.e., mosaicism in sperm or eggs without skin changes such as an epidermal nevus.  Although rare, this is why the risk for recurrence of a dominant trait in parents who show no signs of the disease is still slightly greater than that of the general population, and underscores the importance of formal genetic counseling that  includes examination of parents at risk.

[12]The affected gene FLG codes for the protein filaggrin.

[13] With 10% of the population carrying the mutated FLG gene, a random person would have a 1 in 10 chance being “Bb” (e.g. having one mutated FLG gene, and having, at most, somewhat dry skin). The chance of meeting and marrying another person who is Bb is also 1 in 10. (So the chance of two Bb people meeting is 1/10 x 1/10 = 1/100). If those two people had children, the chance that a child would be “BB” is 1 in 4, and that child would have ichthyosis vulgaris. This gives the expected frequency of ichthyosis vulgaris in the population as 1 in 400. What we think of as the ichthyosis vulgaris phenotype may not be quite so common as 1 in 10 (clinical estimates have ranged from 1 in 250 to 1 in one or two thousand), but other features of the condition such as dry skin and eczema (atopic dermatitis) certainly are!