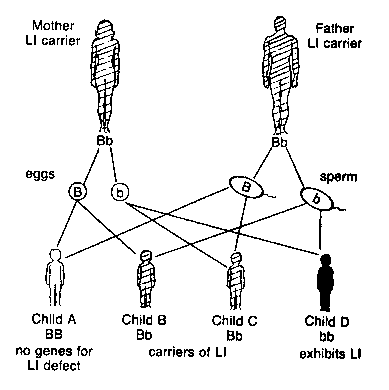 In autosomal recessive inheritance, both parents of the affected individual are carriers. Since they do not have ichthyosis, they usually discover they are carriers only when they have a child with the disorder. The reason their skin is normal is due to the influence of their dominant “B” gene over the recessive “b” gene.  In this case “B” stands for the gene for normal skin, which is dominant over the “b” gene for lamellar ichthyosis. Any children of this couple who inherit a “B” gene will also have normal skin, but the child who gets a “b” from both of his/her parents will have no normal “B” gene to counteract the genes that cause lamellar ichthyosis. [7] This child, "Child D," will display the disorder in the same way that the child in the previous example displays blue eyes. 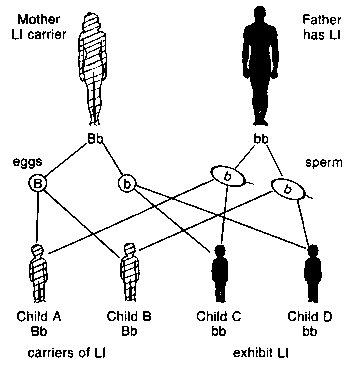 If the person with ARCI-lamellar ichthyosis planned to have children with a person of normal skin, the genetic counselor would want to take a hard look at the “normal “ partner's background to determine if there has been any cases of anything resembling lamellar ichthyosis in his or her family. The counselor is trying to determine if there is an increased chance that the normal spouse is a carrier, because if the spouse is a carrier, the couple would have a 50-50 chance of passing along this recessive disorder.  However, the only definitive way to be certain that the normal spouse is NOT a carrier is to do a genetic test on the spouse.[9]   Again, the odds of marrying a carrier greatly increase if the affected person marries a relative. In fact, the person who displays lamellar ichthyosis can presume that some of his relatives, on both sides of the family, are carriers.

[7] Recessive genes typically produce disease through deficiency or loss of a function.  In lamellar ichthyosis, for example, the causative gene encodes an enzyme called Epidermal Transglutaminase 1.  Mutations in this gene can result in decreased to absent function of this enzyme.  But if only one gene of the pair (i.e., only one allele) is mutated this way, the other gene (allele) can produce enough enzyme to preserve this cellular function such that no skin disorder is manifested, hence the normal gene is dominant and the disorder is recessive.  Only when both alleles are mutated is the loss of function sufficient to result in the skin disorder.  The severity of the disease can also related (at least in part) to the specific mutation; i.e., mutations that result in complete loss of enzyme function may have a more severe phenotype than those resulting in only partial loss of function.

[8] It is important to bear in mind that everybody carries recessive disease causing genes, perhaps 5 or more per person.  Recessive genes for rare disorders like lamellar ichthyosis may be passed on for many generations before a family member happens to mate with someone who carries the same recessive gene and an affected child is born.  In families, the closer the degree of relationship (e.g., sibling vs. first cousin vs. 2nd cousin, etc.), the greater the likelihood for shared genes, including recessive, disease-causing genes.  In geographically isolated populations, the chance that partners may be distantly related is increased and this can lead to increased frequency of otherwise rare genetic disorders (e.g., the increased prevalence of Sjögren-Larsson syndrome in northern Sweden).  In these instances both carriers will harbor the exact same mutation (i.e., they are homozygous for the mutation), traceable back to a common ancestor (founder effect).  But more commonly in pluralistic, larger societies, the precise nature of the genetic mutation differs between the two carriers; (i.e., the specific genetic change in the gene inherited from mother is different from the one inherited from the father).  The affected individuals bearing different mutations in the two alleles of the same gene are called compound heterozygotes.  As discussed previously, these differences in the precise nature of the mutations can underlie some of the variability in disease manifestations and severity (phenotype).

[9] The genes causing most of the FIRST family of disorders have been identified and can be tested for.  Testing is expensive, particularly if multiple genes (genotypes) can cause the same condition (phenotype) and several genes therefore must be examined until a causative mutation is found.   In the example here, Transglutaminase 1 would be the most likely gene.  The affected partner would first be studied to make sure that this was the gene in question.  Then the unaffected partner would be examined looking for potential disease causing mutations in this gene.