How Genes are Passed and Traced
The traits of the dominant gene are the easiest to trace through a family, since their effects are manifested in the offspring. An individual exhibiting a dominant trait can have one of two genetic make-ups[5]:

The capital letter is used to designate the dominant gene, the lower case letter the recessive gene for the same trait. A commonly used example is eye color, although it is important to point out that it is, in fact, an oversimplification because the inheritance of eye color depends upon more than one genetic factor. [6]  With this in mind, however, we will use eye color here as an example of patterns of inheritance because it is something that everyone is familiar with, easy to conceptualize, and not terribly "clinical."

“BB” people pass on only “B” genes - it's all they have to give. “Bb” people, however, can pass on either a “B” or a “b” gene to each of the sperm or eggs they produce; that is, some eggs or spermatozoa will receive chromosome bearing “B” genes and others will get ones with “b” genes.

Example 1
If one parent is “BB” and one is “Bb”, both parents will have brown eyes and all of their children will also have only brown eyes, as shown here: 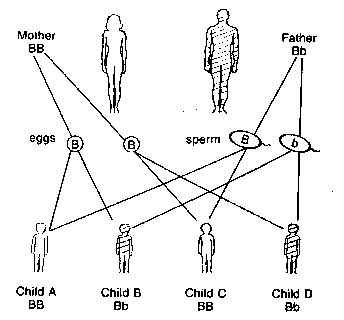 
Example 2
What if two brown-eyed parents have the genetic makeup of the father in the above example, however? If both parents are “Bb” they both will have brown eyes, but they will each pass on either “B” or “b” genes. The child who gets the “bb” gene combination will have blue eyes, not brown, because he has no “B” gene to bully his “b” gene. Thus the "weaker," or recessive trait is able to manifest itself - blue eyes.

In a later section (Autosomal Dominant Inheritance) we will further describe how the dominant inheritance pattern operates in these disorders.  We will now describe the major patterns of inheritance.  For simplicity of discussion we will use one type of ichthyosis as the example or paradigm.  But the choice is arbitrary and the reader should bear in mind that the same genetics apply to all the other disorders that follow the same mode of inheritance.

[6] This type of inheritance is termed multigenetic inheritance.  Many common traits, like eye color or skin or hair color, as well as many common diseases, such as diabetes or psoriasis, are caused by the action of several genes, i.e., are multigenetic traits.  In contrast, members of the FIRST. family of disorders are all single gene (“Mendelian”) traits.