Recent siRNA research, led by Northwestern University’s Chair of Dermatology,  Dr. Amy Paller, has inspired new hope for silencing  the underlying mutation of EI (epidermolytic ichthyosis) and its changes to the skin surface.

The blistering and thickening of skin seen in EI usually results from a change in a single letter of the DNA code (a mutation) in one copy of the gene that provides the codes for manufacture of a keratin protein in the upper layers of skin. Small interfering RNAs (siRNAs) are small pieces of genetic material that can identify DNA pieces and bind to them, preventing the gene from being translated into protein. siRNAs are able to distinguish the mutated DNA from the normal DNA, and thus are able to prevent only the abnormal keratin protein from being formed. The problem with siRNA has been getting it through the skin barrier to where it needs to go. Dr. Paller and her team have found a way to get the siRNAs through the skin, through nanotechnology. By putting about 30 copies of the siRNA all around a central gold nanoparticle (leading to what her group calls “spherical nucleic acids”), the siRNAs are able to be rubbed into skin in a simple moisturizer, Aquaphor ointment.

In the grant proposal, Dr. Paller’s team will deliver an siRNA that specifically recognizes the common mutation of EI, R156H, with the intent to turn down production of the abnormal protein, while maintaining production of the normal protein. Dr. Paller has grown skin cells from several patients with EI and is using these to test if this technique will work for EI using both the cells in culture and a mouse model in which the human cells are grafted to the back of a mouse.

So what exactly is siRNA?

siRNAs are small interfering RNAs (sometimes called silencing RNAs) that “interrupt” the expression of a specific gene. They can recognize even the tiniest genetic change specifically, and thus can distinguish a normal gene from an abnormal gene. As one might imagine, their discovery has caused a surge in biomedical research and drug development for a variety of diseases.  Now, that surge has crossed paths with EI.

How can siRNA effect EI? 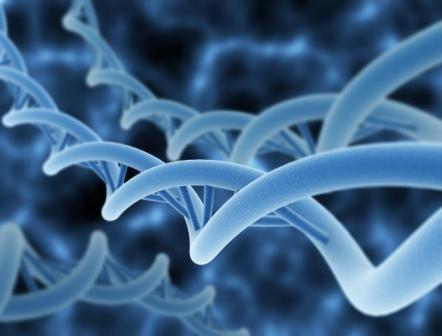 The blistering and thickening of skin seen in EI patients usually results from a change in a single letter of the DNA code (a mutation) that provides the codes for manufacturing keratin protein in the upper layers of skin. This single letter change leads to a protein product (a keratin) which is produced but does not function normally. In a dominant disease, both a normal and an abnormal gene and mRNA exist.  However, siRNAs can identify the abnormal strands of messenger RNA (the intermediary between the mutant gene and the abnormal protein), bind to them, and prevent the altered gene from being translated into protein. Until now, the problem with siRNA has been getting it through the skin barrier, the outermost layer of the epidermis, and into the cells making the bad protein.

Dr. Paller and her team have discovered that siRNA, attached to a “central 13 nm gold nanoparticle” can be rubbed into the skin in a simple topical ointment !  In 2012, her research was awarded a $75,000 grant by the 2012 FIRST Research Grant Program. As of late, "We've developed 3-dimensional models of EI skin in culture and have also grafted EI skin to mouse models.  We have found some siRNAs that prevent the gene from being expressed, but are testing them to find the best one that affects the abnormal, but not the normal gene,” said Paller.  Read the full article here.

How is this work relevant to the Foundation for Ichthyosis & Related Skin Types?
The results of the project have many potential benefits for individuals with EI, as well as other ichthyotic conditions in which there is a localized mutation that can be targeted and the gene product reduced (another example is the most common form of palmoplantar keratoderma). While the project has very exciting potential, Dr. Paller notes that the proposed studies are just the first step in moving the technology towards human trials. In addition, since the siRNA that is developed in this proposal is precisely geared towards decreasing the manufacture of a very specific, mutation-based keratin protein, additional siRNAs would have to be developed to match the needs of each person with EI.


How will members of FIRST benefit from this research?

This type of siRNA gene therapy holds promise for individuals with EI, as well as other dominantly inherited ichthyotic conditions.  If such drugs can be delivered by topical application, that would be a great advance.  FIRST is committed to providing the latest progress of this research, as well all related news and information.  Please visit our site as frequently as possible for the most recent updates. We also invite you to join our email list.

As of late, Paller reports "we are using a new nanotechnology-based technique called ‘spherical nucleic acids’ (SNAs) to suppress the production of the abnormal keratin 10 gene that is the most common change leading to epidermolytic ichthyosis. We continue to screen candidate SNAs to find a few that clearly suppress the abnormal keratin 10 gene much more than the normal keratin 10 gene. In the meantime, we have developed several tools towards this effort, which can also be used by other researchers. Most recently we’ve developed a special ‘lentivirus reporter construct’ in which we can see through changes in fluorescence whether or not our SNA works.”

Dr. Paller and her team recently received more good news with regard to progressing their research. “We just received a grant from the National Institutes of Health (NIH) to continue this effort based on our preliminary data collected with FIRST’s funding support. FIRST has been instrumental in furthering our research efforts related to ichthyosis,” she said.

Proceedings of the National Academy of Sciences of the United States of America www.pnas.org/cki/doi/10.1073/pnas.1118425109

*Nanotecnology.def: n. a technology executed on the scale of less than 100 nanometers, the goal of which is to control individual atoms and molecules, especially to create computer chips and other microscopic devices.  http://www.scientificamerican.com/topic.cfm?id=nanotechnology