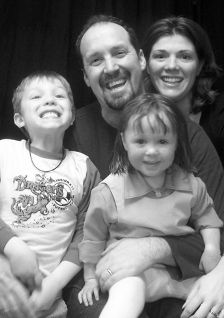 A Lion's Pride
by Sarah H.

Our family lives in Canada, in a house that was built in 1885. Although we have not lived in our house the longest, we like to believe that we have loved here the most.

Craig and I will be celebrating our eleventh wedding anniversary this August. All good things seem to happen to us in August. Our children, Matthew and Ema, were both born in August. Matthew was born on August 2, 2001, and Ema was born on August 22, 2004. Their birthdays reveal two things-firstly, my husband and I are both teachers, thus our propensity to plan events based on school holidays and, secondly, we are both the proud parents of two beautiful Leos.

For those of you who are not familiar with the qualities of the different astrological signs, allow me to explain a few characteristics of the Leo, the lion of the zodiac symbols. It is said they are born leaders, and they know it. They are blessed with many talents and a destiny for greatness. They are generally optimistic and cheerful. If something gets in their way. they conquer it, the way a lion will defeat virtually any foe in the jungle. And like the lion, they do so with dignity (taken from www.Astrology-Love-Horoscope.com).

Matthew and Ema are Leos. They're lions. Or cubs, if you will.

When Ema came home from the hospital, Matthew insisted that he had to give her a present-a small, stuffed lion.

Matthew has demonstrated an instinctively protective nature with Ema. He immediately informs others that she is his little sister and that she's two and three quarter years old. He'll hold her hand, help her brush her teeth and even escort her to bed after reading her a book. Unfortunately, Matthew's protective nature with his littl

e sister does not end there. He is also protective of his toys. She knows this, counts on this, and sees this as his weakness. For example, after Matthew is delivered to kindergarten each morning, she "pounces". Ema seizes this, opportunity to make Matthew's toys her own. She rides his Big Wheel, reads his books, plays with his Lego, and so on. On a number of occasions. Toy Story's Woody has been transformed into a baby doll and strapped into a stroller for walks throughout the house. Upon Matthew's return, great battles have ensued over the ownership rights of Woody. In Ema's eyes, possession is nine-tenths the law and is made binding by roaring, "It's very, very mine!" The perpetual gnashing of teeth and slashing of claws could not be properly resolved until a Jessie doll was finally purchased for Ema on e-bay.

The one characteristic that we are hoping to see develop further in our children is generosity-a trait that Leos are traditionally known for. They both prefer to have the "lion's share" of toys. In an effort to give back to a few organizations that have helped our family in the last few years, I established a charity to raise money for our local children's hospitals through a nation-wide scrapbooking event planned for this October, www.csc4k.com. In a discussion with Matthew about the concept of being "charitable". I mentioned that there were many children at the hospital that would love to play with some of the toys that he no longer wants. His response was. "Don't worry about them. Mom. Santa knows where to find them." Ema also keeps a tight inventory on her belongings. She frequently hides them under her bed, in kitchen cupboards, and even in the refrigerator, so that her big brother can't get his "paws" on them.

Matthew and Ema's "lion-like" behavior can also be seen in their interaction with other, visiting children. Much like the timid antelope that wander through the savannah, many children flee to the shelter of their parents when faced with the energy and charisma of our two cubs. Matthew and Ema are very social. They play hard, love to dress-up, hoot and holler, explore, make things, and have a fun time. Inside or outside, they skip, run, and jump, pausing only for snacks and the inconvenience of lunch or dinner. They also sleep close to twelve hours each night, a solitude that is abruptly halted by seven o'clock wake-up calls of hard cover children's books knocking on our heads. Of course, they are now recharged.

It's also said that Leos know they will reach the top, it's just a question of when. Along the way, they are organized, frank and out-spoken, qualities which focus on their target of being a leader. Nothing could be more true of our youngest, Ema. While turning only three this summer, she feels that she is ready for school. Each morning, she routinely packs toys and snacks in her Dora the Explorer backpack, eagerly anticipating our walk to Matthew's school. Upon our arrival, she graciously greets several of her fans (various mothers, fathers and grandparents that are dropping off their loved ones), show off her outfit-of-the-day ("People like Ema's shoes!"), and then leads a line of marching children across the field and through the playground equipment, while waiting for the bell to ring. The only reason she does not cause a scene each day when she is not allowed into the school is the knowledge that Matthew's toys are laying unprotected back at the den.

Both of our children are intelligent, compassionate, strong-willed, and happy. It stands to reason that Matthew and Ema are the pride of our family. They are, after all, our beautiful lion cubs.

Ema just happens to have been born with ichthyosis.