Few and Far Between

“In the end what I learned is that the story was really not about our differences, it was about our shared connection.” – Meredith Rizzo 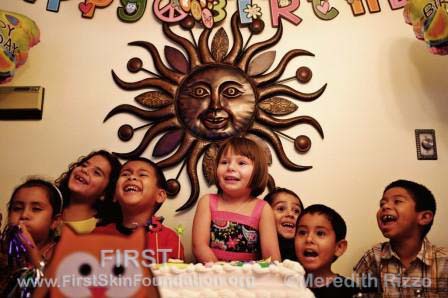 Every once in a while, “perfect timing” is more than just an eruption of coincidental moments…it is, in fact, destiny.  At least, that was the case when young photo journalist, Meredith Rizzo, set forth to create her final thesis for a Masters of Arts degree in New Media Photo Journalism from the Corcoran College of Art & Design.

“The assignment for our thesis was to submit a long form body of work,” said Rizzo when describing the very first steps of her journey. “Around that same time, I learned that there would be a FIRST family conference in Denver.  So, I decided to go to the conference and see if I could document someone affected with ichthyosis.”

Meredith’s father, Dr. William Rizzo, a current member of  FIRST’s Medical & Scientific Advisory Board, is a geneticist specializing in inherited metabolic diseases at the University of Nebraska Medical Center. He has been researching Sjögren-Larsson syndrome for the past 25 years.

As ichthyosis is  one of the symptoms of Sjögren-Larsson syndrome, the skin disorder itself was not unfamiliar to Rizzo, and in fact, she worked at the research lab with her father for an entire summer as an intern. But, now– as a curious and conscientious journalist– she was interested in hearing about the disorder, directly from the source. She hoped that one of the affected conference attendees would be open to sharing their routine, their challenges,; and the bull’s eye of all inquiries: how the diagnosis of ichthyosis has changed their lives.

“I met the Chappell’s on the very first day of the conference.  Their daughter Mia not only has ichthyosis, but she has Sjögren-Larsson syndrome – the very same syndrome my dad has researched for all these years. So it was really great to meet someone whom my dad’s research really has really affected. The disease is so rare, that doesn’t really ever happen.”

As described in Rizzo’s essay:

Sjögren-Larsson syndrome is a syndrome so rare its incidence is unknown, but doctors estimate around 100 people in the United States live with it. For Mia, neurological impairment associated with the syndrome means that she is still learning to walk, climb stairs, and hold herself upright. Her mental progress is two years behind that of other children her age, and she has ichthyosis: dry, scaly skin– a lifelong condition that will require a daily regimen of scrubbing and lotions.

Rizzo would soon discover that the syndrome itself, may have changed the daily routine and future plans for the Chappell’s– and yes, they are learning to deal with the constant  boomerang of ups and downs, but in truth…

the disorder has really nothing to do with… their life.

Fate Takes its Next Cue…

“The Chappell’s were so open to the idea right from the beginning.”

And then fate stepped in again.  The young woman whose father, a gifted geneticist, researching one the rarest syndromes known to man, was being lead to use her gifts and raise awareness for that very same syndrome. “Coincidentally, they live only 45 minutes from me so I was able to really connect with them pretty often over the course of the next ten months.”

Rizzo spent time with Mia in nearly every aspect of her life; at her school, capturing the interaction with classmates; at one of her physical therapy appointments and on a few occasions she even quietly accompanied Mia during her morning and evening skin care regimen, with mom and dad. “Whatever she was doing or wherever they were going when I went to their home, they invited me to come along and document what was happening. I even tagged along on Halloween!”

One particularly painful milestone was the day Mia visited the Orthotic Prosthetic Center, in Fairfax, Virginia, for the very first time. “The photos from the day she went to the doctors and got fitted for her new leg braces really capture some of the medical challenges they are dealing with.”

The story behind the story was beginning to appear.  “It was remarkable how much of their lives they shared with me. But then I realized, I was giving them a chance to talk about their situation, because, so often, they are simply not asked.” 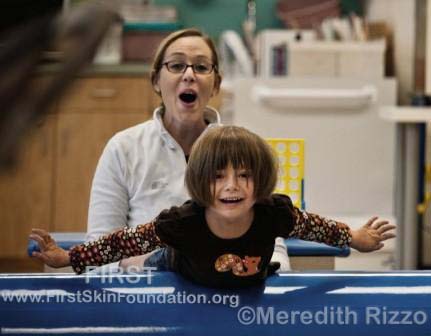 Ten months later, she had gathered the pages of a story that had become not only a school project, but a mission.

During the final stages, Rizzo reached out to a connection she had made at Corcoran. “A mentor of mine is actually the photo editor for National Geographic Magazine. She introduced me to their graphic designer, who helped to format the whole photo essay.”

Meredith’s desire to tell an untold story and  infuse it with “the energy of the subjects themselves,” was quickly manifesting into a uniquely personal piece of work, combining text, video and photos, and crafting an online photo essay, and e-book, that reflects not only the deep and profoundly human experience of the Chappell family, but of the journalist herself.

“I went into the experience thinking I would write about how the family deals with symptoms, liking itching or immobility. I would reveal how their lives were so different than everybody else. But in the end what I learned is the story was really not about our differences, it was about our shared connection. The story of their lives isn’t about Sjögren-Larsson syndrome, it’s about a family’s love for their daughter…and that’s universal.”