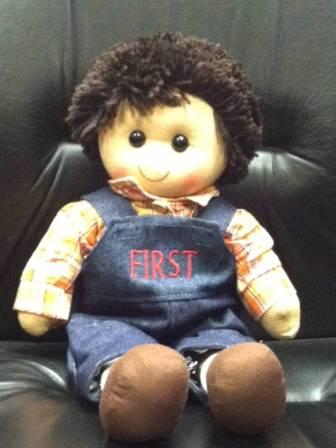 COLMAR, PA (March 20, 2013) – As we get ready for the first pitch of opening day, there will be one important fan watching from the stands.  Tommy, a small doll, dubbed the MLB’s Biggest Little Fan, has traveled to Major League Baseball teams across the country to help raise awareness about ichthyosis, a group of genetic skin disorders characterized by dry, cracked, scaling skin.

Tommy’s nationwide tour was inspired by Dane Phelps, who passed away in 2008 when he was just three years old from complications related to his ichthyosis. In an effort to broaden awareness about the disorder, Dane’s parents Suzanne and Eric, along with the help of FIRST, launched a nationwide tour of NFL Teams this past November with a goal to visit each NFL team, educate and gain each team’s support, as well as obtain an official team jersey.  After all team donations were received, they were included for auction at the Dane’s Friends for FIRST 2013 event, to be held on September 7, 2013 at the Flint Center in Cupertino, California, where all proceeds will benefit FIRST.

The success of the NFL campaign has led to the expansion of Tommy's travels to the country's Major League Baseball stadiums.  Tommy's adventures will be publicized on FIRST's website and facebook page so that fans across the country can enjoy.

“There is no known cure for ichthyosis, only treatments,” said Jean Pickford, Executive Director of FIRST.  “It is our hope that with the funds raised from this event, we can continue to conduct more extensive research and provide services to the members of FIRST taking us one step closer to finding a cure and better management of the disorder.  We can’t thank the Phelps enough for their efforts and support.”

According to FIRST, each year, more than 16,000 babies are born with some form of ichthyosis, of those, approximately 300 are born with a moderate to severe form.  This disorder affects people of all ages, races and gender. It usually presents at birth, or within the first year, and continues to affect the patient throughout their lifetime.

About the Foundation for Ichthyosis & Related Skin Types, Inc.®
The Foundation for Ichthyosis & Related Skin Types, Inc.® (FIRST) is the only nonprofit foundation in the United States dedicated to families affected by the rare skin disorder ichthyosis.  Approximately 300 babies each year are born with a moderate to severe form of ichthyosis.  FIRST educates, inspires, and connects those touched by ichthyosis and related disorders through emotional support, information, advocacy, and has supported more than $1.4 million in research funding for better treatments and eventual cures.  For more information, call toll-free at 1.800.545.3286.